A Wedding in Okinawa: 結婚式

I received a wedding invitation from one of my Japanese friends that I dance hula with. How exciting~ but there was a lot to prepare for… I didn’t want to be that gaijin, even though I know they do not usually expect much from me.

One thing to be clear though… Okinawan weddings are definitely different from mainland Japan weddings!

I received the invitation after accepting from a text message to go. The envelope was simple, but had my full name and … on it. On the inside, the invitation was actually a bit like your typical western wedding invitation, but there was also a “ticket” to bring to the hotel banquet hall on the day of the wedding party. 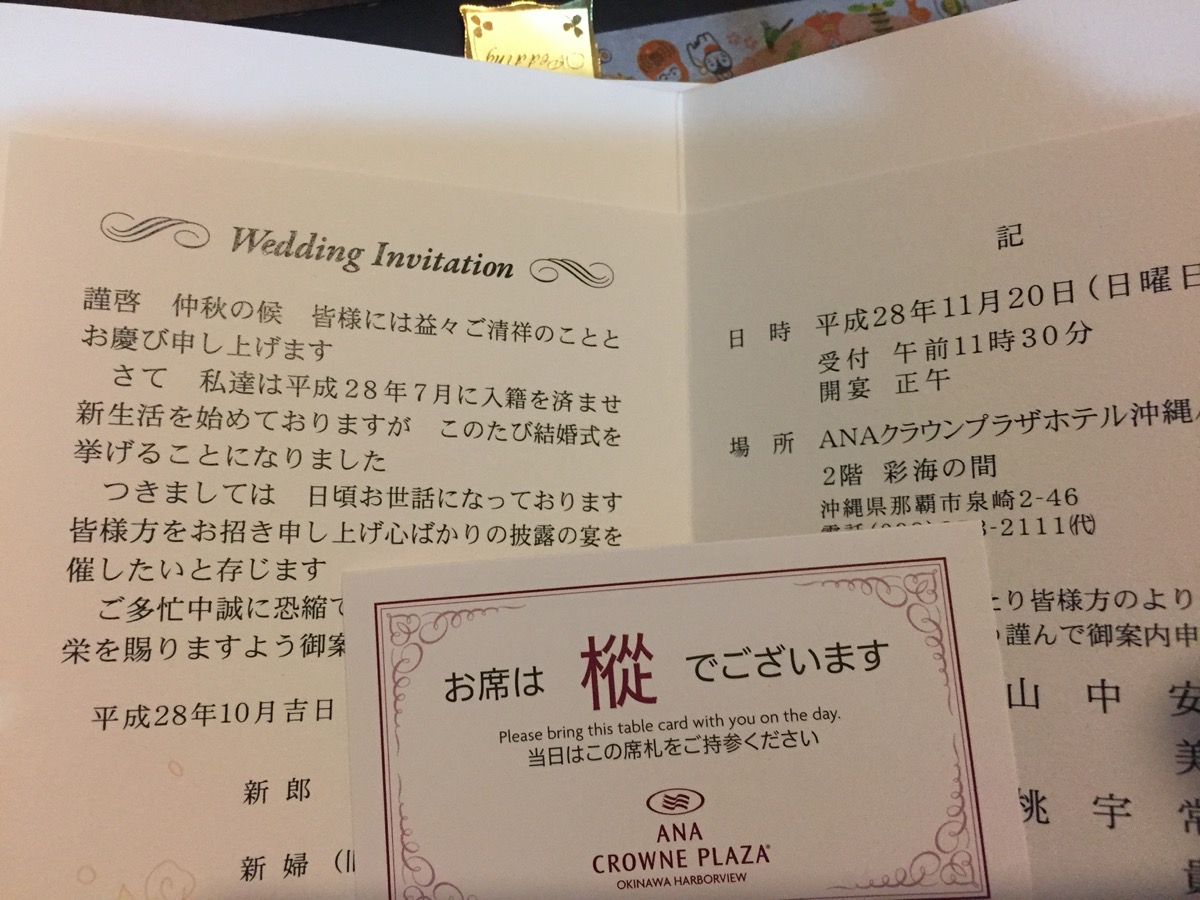 The Money:
You don’t really give wedding gifts from a wedding registry here. Instead it is cold hard cash. This is called “goshugi” ご祝儀.

Buy an envelope from a stationary store (or even a Daiso). I went to Ryubo and chose a pink one with “Happy Wedding” on it so I knew I could not go wrong. There is a large envelope selection for celebration, so you must make sure to choose one appropriate to type of celebration and for the appropriate amount of gift money. The envelope was labelled as appropriate for gifts of 1万-5万円 (~100-500$USD).

Then on to the money portion. How much to give? Well, weddings are expensive… the first rule is to give an odd number of bills (so the couple does not split up), as well as crisp new bills (so the couple has a fresh start on married life). For a wedding in Japan, it seems to be customary for friends/coworkers to give 30,000円, consisting of three 1万円 bills (~300$USD). This is per person, couples or a family with multiple would again give some odd number, and usually at least 30,000yen per person. Recently it seems there is some trend to give 20,000円, with one 1万円 bill and two 5千円 bills. Typically the older you are, or the closer to the couple you are (so if you were cousins or family of some sort), you would give the couple a larger amount. In Okinawa, though the total amount given is lower than the mainland, and 1万円 is sufficient; but again I think it may depend on the couple and the type of wedding (casual versus formal, the location venue, etc), so again it is important to just use your best judgement. Basically something to remember: only agree to go to a Japanese wedding party if you can afford it! Since I will likely not attend very many, well… it is a really nice opportunity to learn a bit more about this side of the culture, and I am excited for my friend.

Well, this is a difficult one since we are in Okinawa… is Hawaiian formal okay, I wonder? I should I stick with what I understand from mainland Japan, and wear a semi-formal sort of cocktail dress (comes to the knees, subdued colors, shawl or jacket over bare shoulders)? Maybe I overthought this (a lot). So last minute decision was to wear the cocktail dress. I will already stand out being a foreigner, I don’t need to add on any outfit faux pas.

One thing I noticed is that black (even all black) is totally okay to wear. Another is that a nice pants suit is also okay for ladies.. this could be because it is Okinawa and more casual though. Otherwise most females were in the typical cocktail dress type of outfit and everyone’s shoulders were covered (so no strapless, no spaghetti straps, no sleeveless that were not covered by a wrap or jacket of some sort).

So it is not so much a wedding like in the US at a church or other venue, and then a reception. Instead, it is much more common to simply hold it at a hotel venue, and there is usually no religious or other formal component. It is more like a wedding reception.

After we arrived, we signed the guestbook and handed over our goshugi. I was not the only one a little nervous; for one of my younger hula friends this was also her first time to attend a wedding.

Now this is the part where Okinawa was so different from Japan weddings. Most articles talking about Japanese weddings always mention a lack of drinking despite the drinking culture. In Okinawa, there was much alcohol to be consumed, and was very much a part of the celebration. At an Okinawan wedding, it is okay to be a little drunk (maybe not sloppy, but a little drunk). The hotel also catered a very large feast with platters brought out to each table during the party, as well as a fairly continuous stream of Orion bottles.

Some parts were similar to what I had heard; there were slideshows of the bride and groom, both individually and together (a total of 3). Plus toasts and special messages to the bride and groom, as well as a tearful letter of gratitude written and read by the bride to her parents. The couple dressed in 3 different outfits during the entire wedding party, 1 traditional Japanese, and 2 western (1 white bridal gown, and 1 very Japanese-western style blue fluffy gown). There was a cake cutting, candle lighting, a champagne toast, and some other sort of normal, expected elements.

Then, things got a little weird. There was much revelry in between the sappy, serious parts. The groom’s friends put on a series of performances, which was definitely… well, perhaps a bit uncommon by American standards. I will link a photo album with some explanations. But basically… anything goes during this part. Anyway, it was a ton of fun and very entertaining, albeit a little shocking. I am guessing these types of performances might be less common at a mainland Japan wedding… many of my hula friends giggled, and suggested that Okinawan wedding affairs were significantly different from mainland Japanese weddings.

On the bride’s side, my kumu (hula teacher) danced, and then the bride performed a hula with a small group. Much less risqué then the groom’s friends.

At everyone’s seat, there was a bag with the name on it. These were the “gifts” to take home. It was a set of fancy Ryukyu glasses that are so popular here in Okinawa. Quite lovely, and I will think of the bride often when I use them. 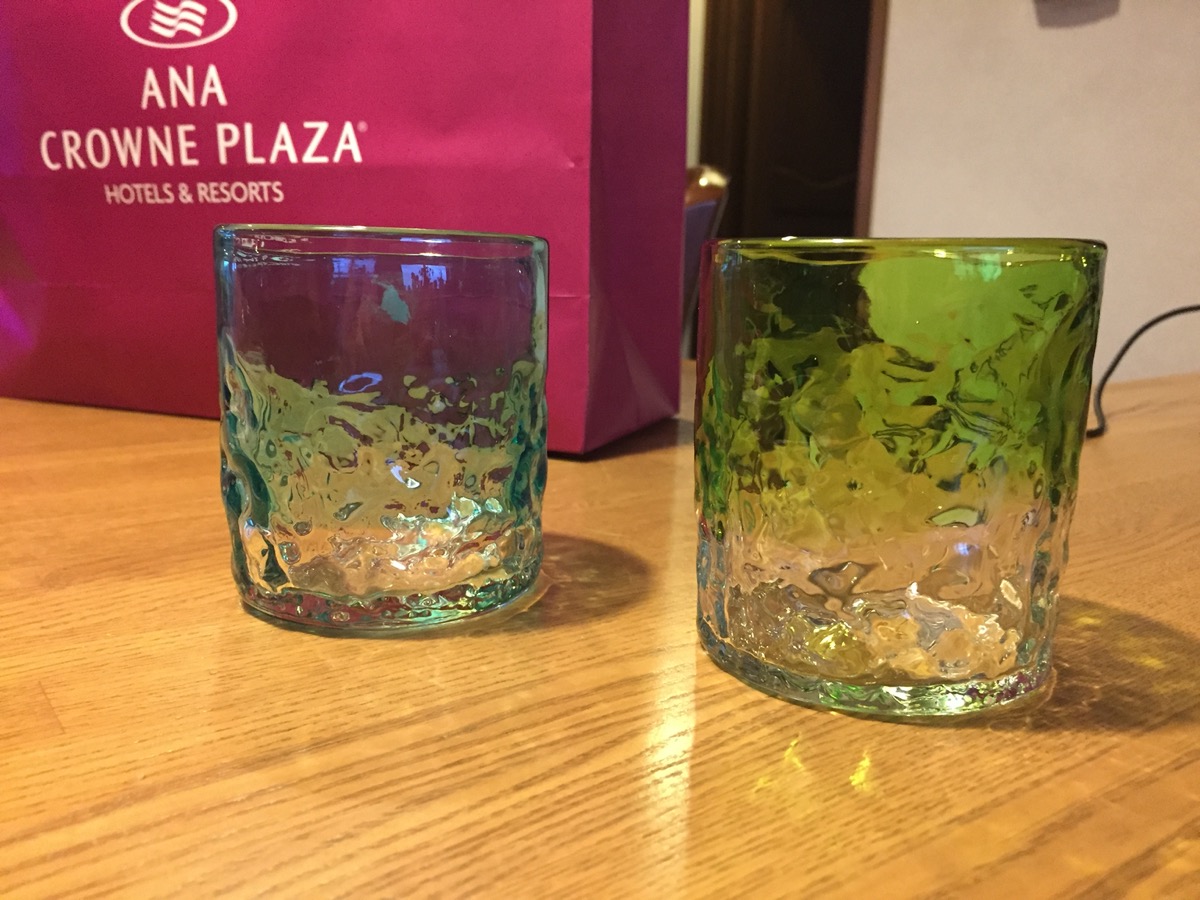 There was also a second party afterwards, more casual affair with drinking. I ended up being exhausted and going home, instead. I was fairly worn out by the excitement, and honestly, I had to work the next day. A hangover simply was not in my future.