As part of the craft brew craze…, well if not craze at least increased excitement, that has spread around Okinawa and Japan in the past few years; Ukishima brewing has opened up off Kokasai street in Naha. It’s a bit of a strange place, it’s in the back “Sunrise Market” shopping streets, on the third floor. Initially we were a bit worried if we were in the right place, on the second floor looked like a beer garden/izakaya, but it was closed both times we went by (On Friday nights, so I’m guessing permanently closed). When we made it to the third floor we saw the entrance to the taproom and the sweet smell of hops and yeast greeted our noses.

They have a large number of beers, we liked a lot of them although my favorite was the Golden 107, it had a dark color and a refreshing taste. A three beer tasting flight was about ¥1300, a little high but the pours are generous. The individual beers were around ¥800 for I’m guessing around 330ml.

The taproom is modern and has long tables that could hold about 20 people per table, plus some seats at the bar. A bright yellow neon sign proclaims “ede, bibe, lude”, which means “eat, drink, play”. There are clean bathrooms and polite service. Both times we have been there have been about eight beers on tap, all of them brewed by Ukishima Brewing, no outside beers are available.

We only tried the fried potatoes as we weren’t yet ready for dinner when we went thru. They were good, house made potatoes. The food we saw other folks getting looked pretty decent, but as with most microbrews the beer is the name of the game and the reason to go!

Location: Back shopping streets of Kokasai. The street level entrance is an open stairway heading up with yellow coloring and proclaiming Ukishima Brewing.

Some other craft brews worth considering:

Taste Of Okinawa (Not a brewery, but has lots of local/Japanese beers on tap)

The microbrew scene on Okinawa has expanded drastically in the past 4 years. Ukishima Brewing, Coral, Taste of Okinawa (Not a microbrew itself, but they support lots of local microbreweries) the list goes on. The most recent as of the summer of 2019 is Wolfbrau, as you can probably guess from the name it’s German style beer, run by a German gentleman who retired to Okinawa. Their shop does double duty as a coffee and beer brewery!

The beers are all made in house, and are what you might expect to find in Munich. Schwartz, Dunkle, Alt Ale, Weizen, and more. Everything tastes clean and refreshing. Almost all are reasonable ABVs of around 5%. We’ve tried four of their varieties and yet to get a bad one! The owner is very friendly and if he has time will chat with you about his beer and upcoming creations.

I’ll admit we’ve never actually ordered a coffee, but we have had the Coffee Craft beer which is beer that has been soaking in coffee grounds overnight. It had an amazing coffee flavor which made us want to order a latte! The coffee roaster is in the shop and along with the Coffee Craft beer we have seen other customers order a cup and it smells divine.

For food they have a small menu of German inspired fair. We had the cheese tray and the sausages. Both were delicious. The cheeses are made by Cheese Guy John Davis (a famous Okinawa Cheese maker)

Getting There: The brewery is located in the greater Shuri Castle area, if you take the monorail exit the Shuri station. The Gibo station is slightly closer looking on the map; however, there is a steep climb uphill.

Summer in Japan would not be complete with beer gardens. In Okinawa, there are a few around this time of year. They typically have nomihoudai 飲み放題 and tabehoudai 食べ放題 (all-you-can-drink/eat) plans. Some of these beer gardens are very popular, so it is important to get a reservation.

This year, my husband and I decided to go to the beer garden held by ANA Harborview Hotel in Naha for our wedding anniversary. The bonus to this beer garden: wear yukata or jinbei and receive a significant discount! We also booked a room for the night, so we could just crash after our 2.5 hours of drinking and eating.

So, of course, I dressed myself and my husband in summer yukata to save money and to make it a special experience. It was my husband’s first time wearing yukata in public; he received many high-5s and “kakkoii.” It is somewhat rare to see a foreign male wearing yukata unless he has a Japanese girlfriend or wife (so some people were surprised to learn that, yes, I dressed us both by myself). A few people even took our picture; we were the only ones dressed in yukata that evening as most the others were there for after-work gatherings.

Anyway, when we arrived at the outdoor beer garden at our allotted time, it was decorated with string lights. It was a little warm out, but as the sun was going down, the temperature was dropping a bit. The food was set up buffet style (it is themed for every month, this month was “Spanish”), and even the drinks were self-serve. They had 3 beers on tap: Asahi super dry, Asahi black, and Orion. Additionally wine and highballs were available. Probably awamori and whiskey, too, but I did not much notice.

The food and drinks were pretty good, and we had a really nice time. Part way through the evening, the staff came out with a special cake dessert and sparkling peach wine for us since I had mentioned it was our wedding anniversary in the reservation. The service was really above and beyond, so it was a great way to spend a special occasion. Since we got a discounted price, I thought it was a good value… if I paid full price, I may not have felt quite the same. Full price was 4500yen, discounted price for wearing yukata… 3000yen. 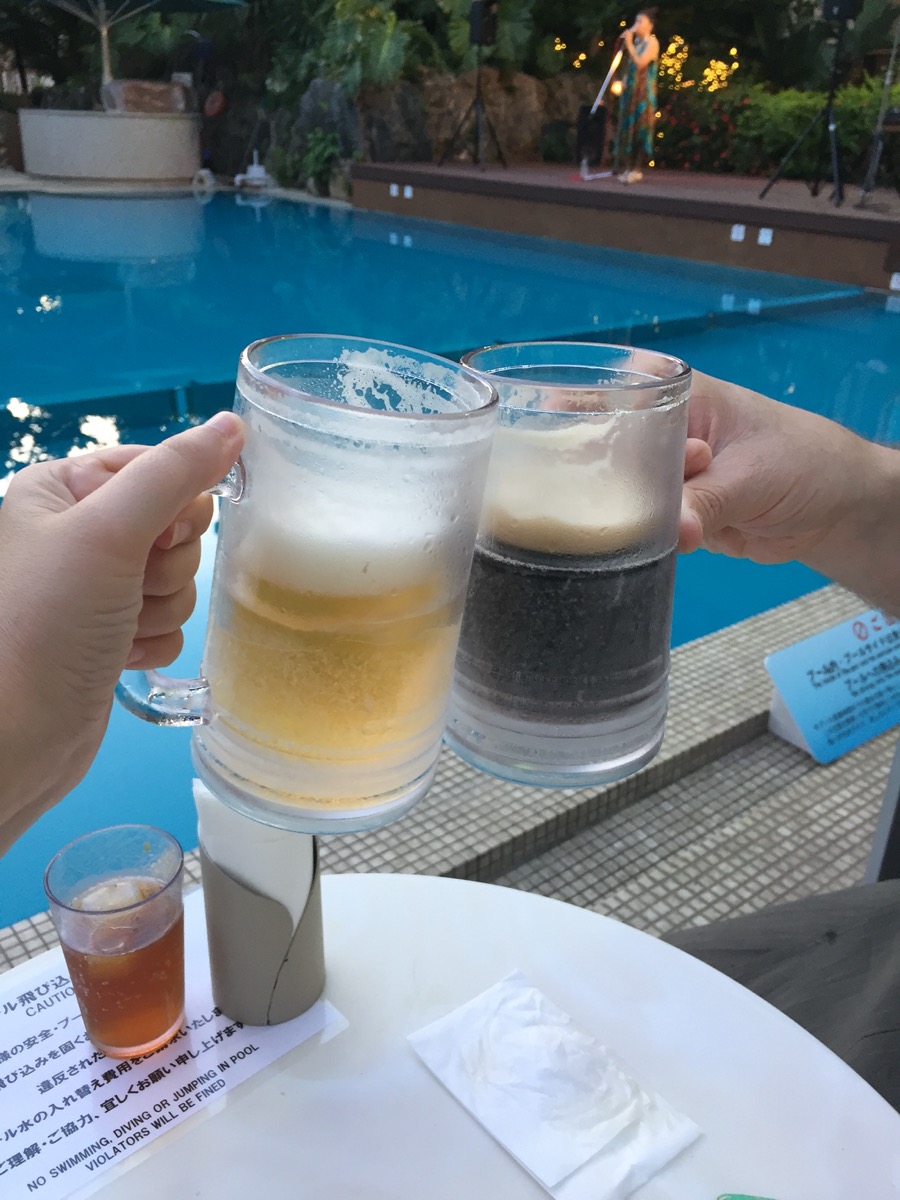 At the Okinawa Food and Flower Festival, the newly renewed Nanto Brewery had a booth promoting their Okinawa Sango beers. Their new beers are made with water filtered with Okinawa corals. Previously, their beers (under the brand Nihede) were quite horrible. At first we walked by their tent, unconvinced, but then thought, with this new line… better give them another try, right? Especially since it was on draft.

So, my husband and I decided to go big and pay for the 1000yen, 4 beer sampler set. The set included:

Saison- I liked this one, but my husband does not like saison-style. This is a seasonal beer and not on their usual rotation.

IPA- We both agreed this was probably our favorite. Citrusy and refreshing. My husband does not usually like IPAs but he liked this one… I don’t think it really tasted much like an IPA, but either way, it was good.

ALT- I don’t know what exactly an alto German beer is, but it was a reddish-brown beer. Not bad.

Black Ale- my husband liked this one; I don’t like a lot of black ales, so this one was not really for me.

Overall, these beers were way better than their previous incarnation. That being said, I probably wouldn’t pay 500yen a bottle, but on draft… probably I would, if I was feeling fancy.

The Nanto brewery is located out of Okinawa World in Nanjo, so you can give them a visit.
address: https://goo.gl/maps/4nHJgV2gNgm

0.00% alcohol beer is actually more common here than you would imagine. I feel like in the US, this was a bit unheard of. But here in Okinawa, Japan it is rather common.

So what is the point you ask? Well, drinking culture is rather heavily entrenched in the Japanese social environment. Sometimes you need a break in between drinks, or maybe you have to get up early the next day, perhaps you are the DD, or maybe you are just a real lightweight– whatever the case, there is an alternative that allows you to feel included in the party, but not suffer from excess drinking. This alternative is alcohol-free beer. Usually, you hear people just drink soda or juice as the alternative; but that would be no fun, and plus, all your coworkers/boss or social club members would know you are not actually drinking, and this can put a damper on things (remember I mentioned drinking is heavily entrenched in building social connections?).

Anyway, alcohol-free/zero alcohol/non-alcohol beer actually is not so bad; the taste is not quite as refreshing and good as real beer, but it is a decent substitute for when you cannot or should not drink actual alcohol. And the good part is, many are actually calorie-free, so sometimes it is nice just for that. Pretty much every beer label here makes at least one if not multiple alcohol-free beers. Just look for the 酒0.00% which is marked clearly on the label. But be careful– some beers are marked 0/zero or free for things other than alcohol, so make sure to look for some keywords or you will pick up the wrong one:

I often go for the Orion Clear-Free with the blue label, although the regular Asahi dry zero is pretty decent, too.

At every social event, BBQ, and bar/izakaya I always see the alcohol-free options. You will see plenty of people picking up a case at the grocery store, too. Recently, I danced in a luau; before the show many of the members of my group were drinking alcohol-free beer, to set the mood but not be affected by alcohol! Non-alcohol beer is not just for prudes, tee-totalers, religious folk, etc; it is really for everybody.

Some other types of non-alcohol beer, all easily found in grocery stores and conbini in Okinawa:

Grand Kirin is a line of “craft” type beers that are produced by Kirin beer company. They come in glass bottles and the labels look classier than the average Kirin beer. Sort of hipster, really. These beers are a bit pricier than the regular beers, but overall I do like the taste better. Luckily, my local FamilyMart carries them, so they are pretty easy to find. Anyway, they have many limited release beers that I have been tracking through the year; I was especially interested in the moon-watching beer that was available in September. Unfortunately, most are limited release and only available for a few months at most, but the good news is that means they release new ones to try. I have probably tried all of them, but keep forgetting to take pictures… I guess this means I need to go out and grab a few more beers. This is an initial sampling:

Orion is locally brewed in Okinawa, and therefore popular here. It is tolerable, sort of comparable to Budweiser I suppose. Anyway, if you make it to Okinawa, a stop at the Orion Beer factory where you go on a free tour and receive 2 beers afterwards is a must.

Orion actually has many varieties that it sells; some are seasonal or limited edition, and others are old standbys. Here are a few of I have imbibed over the years:

“Splash beat” is new this summer; not too bad. The next one is a Shikwasa beer (shikwasa is sort of an Okinawan lime), and again, not too bad, but a little strange. Third is obviously draft; “nama bi-ru” 生ビール means draft beer in Japanese. Aeon Rycom is regular Orion with a special label to commemorate the opening of a very large shopping mall in Okinawa. Erm, yes… it is a small island sometimes and you celebrate things like this. Next is ちゅらたいむ “chura taimu” which is a mix of Okinawan (chura meaning beautiful) and Japanese-English (taimu which is TIME). This is actually a lovely summer beer that I quite enjoyed.