Time to share a small gem located in Ginowan. It is on top of a hill up a narrow road off of Pipeline-dori, actually situated in a peaceful neighborhood near a lot of Americans… but somehow this place remains untouched.

There are other hammock cafes in Okinawa that you hear about all the time. But this one is really nice and quiet. It has a beautiful view overlooking Ginowan, plenty of parking, sweet and friendly owners, and the lunch plate is mostly (if not all) vegetarian and vegan. How has this place stayed so hidden?

For 1200yen you get a plate of the day, drink (hot/ice coffee or herbal tea), and dessert. It was all really good. Admittedly service was a bit slow/haphazard, but hey, we are on island time. This is a great place to relax with a slow, healthy, and delicious lunch! There were many colorful hammocks to relax in. It was perfect for a beautiful day. Keep in mind if you go, the menu listing was all Japanese and I had the impression only Japanese was spoken since no one attempted to speak English with me (all our conversation was in Japanese). That being said.. there is no menu to really choose from, just the plate of the day is offered, so why not go for it (oh and remember to remove your shoes at the door)!

Located in Ginowan, on Pipeline Road (パイプライン道), is a small and tasty baked goods shop. But this is no ordinary baked goods shop… this one has some items not easily found in Okinawa. This is another gem from the Porte magazine mentioned in a previous post.

I winded my car down the erratic Pipeline road, until finally GoogleMaps told me I had arrived. Tucked away, with 2 parking spaces out front, I saw the sign for Nanan Pipeline. When I entered I was greeted with some samples of the goodies in the showcase; lemon-poppyseed cake, fruitcake, carrot cake, poundcake and more. Some items were labeled as gluten-free, too, for those who have special diets. Oh, the choices… everything looked really good. Unfortunately their coffee was sold out for the time being.

Well, I ended up getting a carrot cake, lemon-poppyseed cake, and a ginger biscuit sandwich for about 500yen! Not too bad a price, and everything was top-notch. It has been a long time since I have had a really good carrot cake and this did not disappoint!

Cafe Nicoli in Ginowan has smoothies (スムージー) and scones (スコーン). I passed by there many times but never stopped in, so finally I decided to take a peek.

Since it was a hot day, a smoothie sounded nice. There are 2 parking spots down the small road past the shop, across from the Ginowan library labelled for the shop. The shop is very cute looking from both the outside and the inside. There are rows and rows of scones, as well as a few cookies which all smelled rather delectable. I will try to remember these for next time I need a baked good. There were quite a few smoothie choices, from coffee bases, yogurt bases, cream bases, and fruits bases. Some were sold out though, so check the board inside the shop.

The price and size of the smoothie was really quite reasonable (perhaps even cheap) for Okinawa; I got a mango smoothie which was likely not made from local Okinawa mango but frozen ones. Which for the price was fine… if it was made from local mango I am sure the price would be quite a bit more. 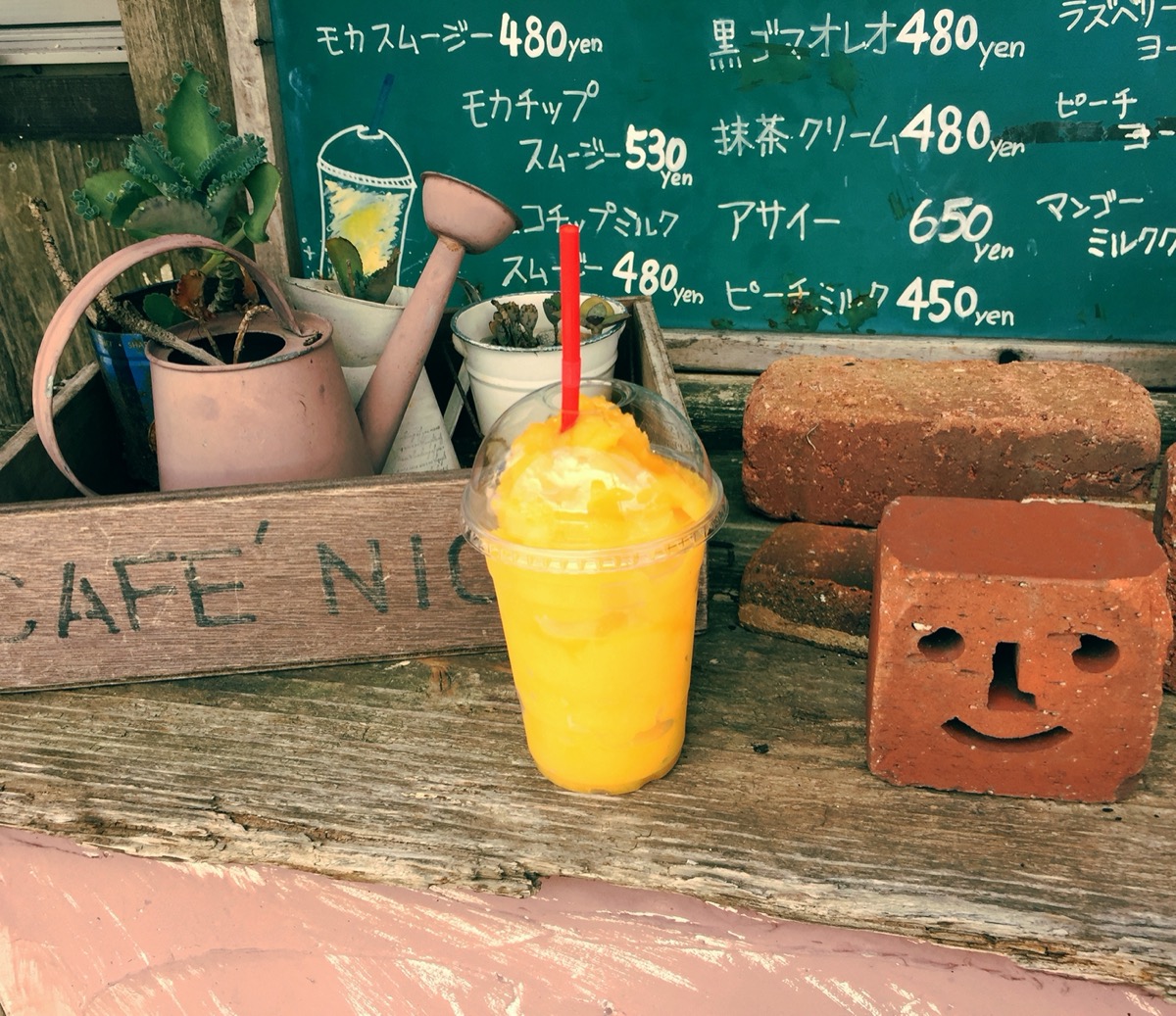 Slowlife Cafe is a beach-themed cafe located in Ginowan. I pulled up, and parking seemed a bit… well, anyway I pulled up the curb where some other cars were parked, so I think it was okay. The cafe is on the 2nd floor, so it has a pretty nice view if you go out to the terrace.

Anyway, the interior was very nicely decorated and comfortable, sort of “beach chic” with natural wood and ocean colors. The menu was only in Japanese, but not too complicated as there are only 4 items on the menu for lunch: plate of the day, pasta of the day, don (rice bowl) of the day, and sandwich of the day. Each come with soup, salad, and drink, all for 1000yen; if you add the cake of the day, it is an additional 150yen.

They didn’t have all of the -of-the-days written out anywhere like most places, instead the server listed them off. Though it seemed he was not confident that I would understand much because I was a foreigner, he said them all fairly quickly and without much details. I didn’t bother to correct him on that or ask more details, as I pretty much knew I would get the pasta anyway and I added on the cake since it was cheesecake. Not that he was rude or anything, quite the opposite, very friendly… just a lot of times as an obvious 外国人 people tend to assume you have zero grasp of the Japanese language. Everything was pretty good; not superb, but for the price I thought it was pretty decent. I enjoyed eating in the relaxed atmosphere. It definitely seemed like a trendy but not expensive place where young 20somethings could eat, drink, and enjoy life slowly not too far from Tropical Beach in Ginowan.

There are many locations in Japan and even Korea where the “celestial maiden” (or also known as “heavenly maiden”) myth takes place; one such place happens to be in Ginowan 宜野湾, Okinawa at Mori-no-kawa 森の川 (also written as: 森川). Tennyo 天女 mean “heavenly maiden” in Japanese. Tennyo-chan also happens to be the city mascot for Ginowan, so you see her image quite a bit in the area.

**In Ryukyuan language 森の川 is actually pronounced “Mui-nu-kaa” ムイヌカー. Though I have honestly never heard anyone call it that, I have only heard the Japanese pronunciation.

Mori-no-kawa Spring is surrounded by a small forested park, with a few monuments explaining the heavenly maiden legend. The spring (known as a ヒージャーガー hiijaagaa in Okinawa language) is considered somewhat of a sacred place where people would gather water for cooking, drinking, laundry, etc; often in Okinawa you will see small altars here. Sacred spots are called utaki 御嶽 in Ryukyuan language, and are oftentimes located at a water spring, mountain, woods, cave, or other natural geologic feature.

In Mori-no-kawa park, you will see a stone wall with a gate leading to the woods– do not try to enter this area, it is an utaki! It is considered sacred, and only priestesses are usually allowed in there. Oddly, it is also right next to the border with Futenma military base, which actually protects it from potential land developers who would mow it over for a luxury resort, high-rise apartment, or golf course. The wall and gate kind of reminds me of a “secret garden” entrance, sort of mystical and such, with all the thick forest behind it.

I have heard rumors that Mori-no-kawa is both a “power spot” and a “haunted spot.” Perhaps I will post the ghost stories of this location sometime. Either way, it is indeed has the air of a spiritual place.

The Legend of Hagoromo (羽衣 hagoromo: celestial robe): A long time ago a farmer (in other stories he is a woodcutter) named Ufuya Okuma was on his way home when stopped by the Mori-no-kawa (spring); to his amazement he saw a beautiful woman, a celestial being, bathing in the water. Not too far away was her celestial robe (called “hagoromo”) hanging on a tree branch. The farmer decided to take her heavenly garment and hide it. When the celestial maiden discovered her robe had mysteriously vanished she was upset since she could not return to the heavens without it. Ufuya returned and came to the “rescue” of the distressed woman, clothed her, and took her into his house, basically tricking her. Since she could not return home to the heavens, she became the farmer’s wife and later gave birth to two children, a boy and a girl. Legend says that one day the maiden heard her little daughter singing a lullaby, “Don’t cry baby. Toubins-hanin’s (angel’s wings) are hidden in the storehouse under the millet. Don’t cry baby.” The maiden rushed to the storehouse and there she found her hidden celestial robe. She immediately left to return to the heavens, never to return again.

What became of her daughter is not really certain, but legend is that the son grew up and became a great king, King Satto, a once great king of the Chuzan region, the central area of the Ryukyu Kingdom during the 14th Century. This is the Ryukuan legend of the celestial robe.

Every year in Ginowan, during the summer, is the Hagoromo matsuri, in part celebrating the legend, but also the culture of the town.