弥勒: Miroku (Japanese). In Okinawan language it is pronounced “Miruku.” It feels kind of strange, because ミルク miruku is one way to say “milk” in Japanese as well. But in this case, miruku ミルク is a deity 神様 (kami-sama), not the white beverage!

Miruku is actually one of the most commonly worshipped gods in the Ryukyu islands, especially the Yaeyama islands. Often someone will dress as Miruku in the island festivals, a long yellow robe with a large white mask carrying a fan. He is believed to have come from across the sea, nirai kanai ニライカナイ (this means sort of like “heaven” to Okinawan people), and comes bringing good fortune.

Hateruma 波照間島, the southern most island, is famous for “Mushaama,” a festival during the obon. The festival is designated as a National Important Intangible Folk Cultural Property, and held on July 14th of the lunar calendar. It combines obon festivities with harvest ceremonies like the Miruku fertility deity parade and shishimai (lion dance). Islanders offer prayers to their ancestors and pray for their happiness, bountiful crops and of course, a big catch at sea.

In Akata 赤田 of Shuri, a traditional ceremony called miruku unke みるくウンケー is held. A smiling maitreya (a bodhisattva) and his followers walk around the community and pray for the good health and prosperity of residents. The miruku unke ceremony was revived in 1994 after not being held for about sixty years! Since then it has become an annual event. Starting from the Akata Club Community Center, the miruku walks at the head of the parade, called suneei スネーイ. About 100 people follow, including a marching band and children carrying flags of the Ryukyu era (these particular flags are called ンカジ, nkaji, which means “centipede” in Okinawa language, due to their jagged edges), while the miruku waves his paper fan to drive off evil spirits from around the people waiting to watch the parade. Often babies cry (I guess he is a little scary) and elderly people wave from the second floor of their houses. The parade is called suneei スネーイ. It typically happens on the Sunday before Obon. In 2018 this will be August 19th; in previous years it has begun around 4:30pm. In some other villages, the miruku parades occur on different days.

If you live in Okinawa, you should definitely go watch one of these parades with Miruku-kamisama! 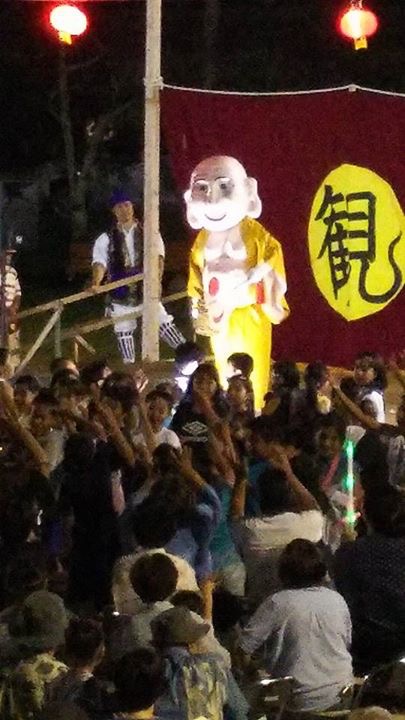 Youtube videos of Miruku in the town near me, Nishihara.