It is customary to send out postcards for the New Year (oshougatsu お正月) in Japan. This is really a huge business, similar to Americans sending Christmas cards every year. You write some customary sayings, and perhaps include some news from the year or personal messages.

The post office delivers them on January 1st, as long as you send them in before the deadline (December 25th)! Last year I received a few. Last year was the year of the monkey, here are some examples (I will post new Year of the Rooster after the New Year): 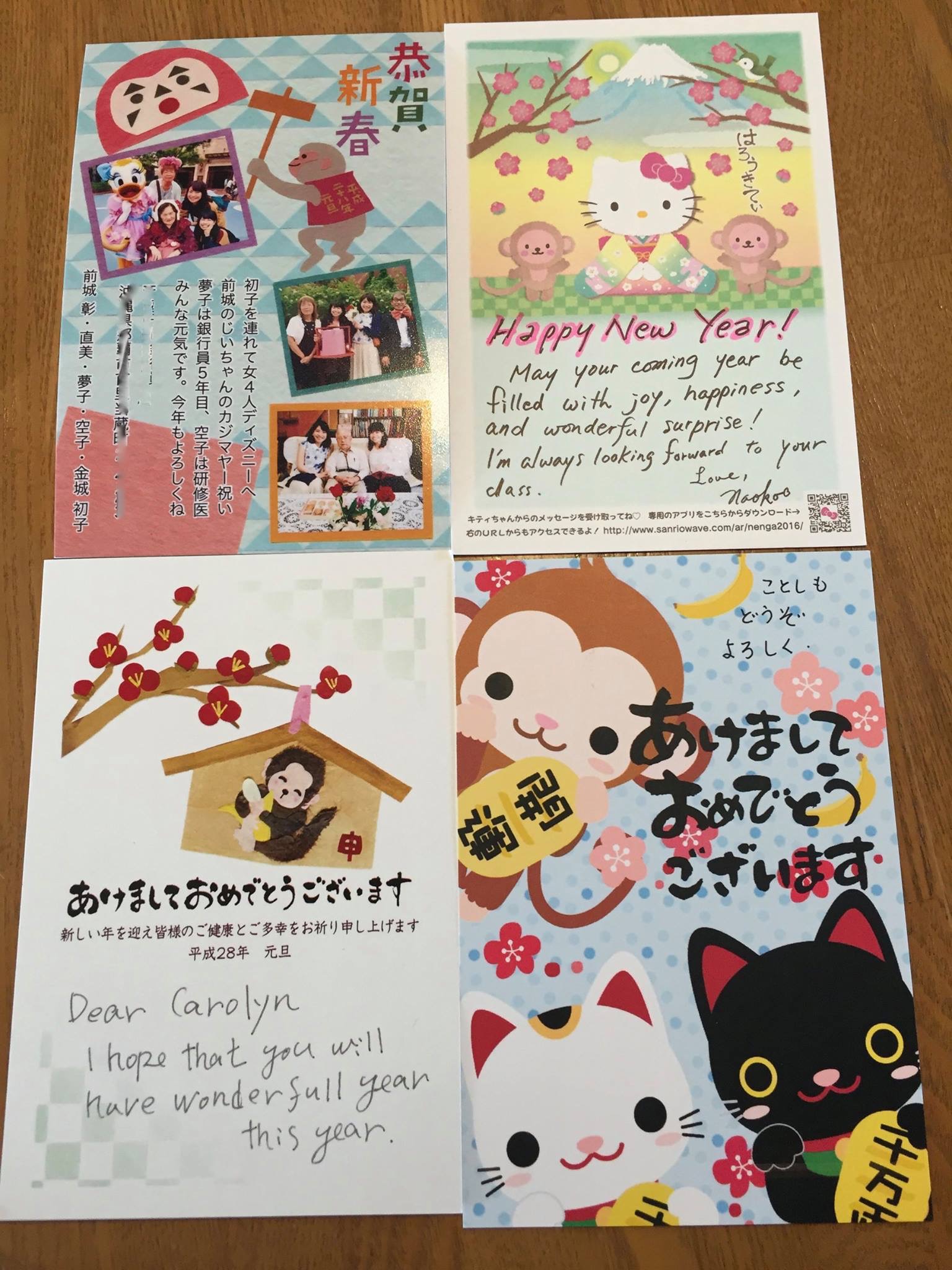 This year, my husband and I custom printed some cards from a popular shop in the SanA mall. We picked a design (not going to lie, it was a Hello Kitty/Year of the Rooster design, and I am not really embarrassed about it despite being a grown married woman) and a picture of us for the front. It is not terribly cheap, but includes the postage. It is rather cute, so I am happy with the result. We will be sending them out to some local friends.

There are not too many rules as to how to write a card, just as long as you can the address on there. The address can even be written in English characters (romaji), or if you want to challenge yourself, write in kanji. Otherwise you can design as you like; the stores are all brimming with ink stamps, stickers, specialized pens and more to design the perfect nengajo! If you google it, you can get all sorts of info on how to send nengajo, but honestly, it is not as complicated as some of them make it out to be– just pick some designs you like, write an appropriate message, and write the address clearly in either Japanese or English. If it does not have postage prepaid on it, go to the post office, the workers will be very helpful; otherwise if the postage is already taken care of, simply drop it in the postbox before December 25th. You can also send them AIRMAIL to other countries, I have sent a few to the US as well for just an additional 18yen per postcard. Again postal workers will be very kind and knowledgeable about this so do not hesitate; on the card in the printed boxes instead of the postal code, just write AIRMAIL, although the postal worker will also affix an Airmail sticker somewhere. It is a good idea to also include your own address at the bottom or front in small print for person receiving the card.

There are some typical phrases you will see on most cards. あけましておめでとうございます akemashite omedetou gozaimasu means “Happy New Year” (well, literally Congratulations on the newly opened year, or something like this). By the way you can only use this AFTER the New Year has begun (so it is okay on nengajo as they are delivered on the first of the new year); if you use it before the New Year, people will give you odd looks. Last year I had heard あけおめ! ake ome! which is a shortened version of this. It was spoken by college age kids to their friends, so remember this may not be the best version to use as a 外国人, though it may elicit some giggles.

Another popular phrase is 今年もよろしくお願いします kotoshi mo yoroshiku onegaishimasu (or some variation of this, ranging on more polite to more casual). It means, Please take care of me again this year.

You will find that the stationary stores are filled with ink stamps, stickers, cards, envelopes, and more for decorating your nengajo. It is almost overwhelming, and so many of them are cute… I have to restrain myself every year.

Nengajo with lottery numbers for the New Year Jumbo Lottery are issued by the Japan Post and usually printed on the bottom of the card. Prizes are announced on January 15th and are household objects or local products. I have never won anything… but then again I have not received so many cards, so my odds are probably pretty low.