There are many, many Japanese customs that come with the beginning of a New Year. In Okinawa, several of them are observed, and some are a little different. Okinawa usually observes most of its customs on the lunar calendar, so there is also a second, slightly different observance for lunar New Year celebrated later as well.

Before the New Year, houses go through major house-cleaning (osouji 大掃除) to prepare for the new year. It is a busy time for everyone. New Years is mostly a family event in Japan, and perhaps especially Okinawa, so they are not usually a lot of large countdowns or fireworks shows. The only fireworks tend to be at the resorts, mostly for tourists. There are some drinking/dancing parties for the younger people. The Itoman Peace Park has a special event with torches and sounding the bell for world peace, then ending with some fireworks. ChuraSun Beach in Tomigusuku keeps their illumination up through midnight and ends with countdown fireworks. There are usually some fireworks up in Awase by the Comprehensive park as well. Overall they are very short shows, nothing like the summer. Every year I see someone online saying there are fireworks in American Village, but then I never see any info on it and later people complain there were none; I am guessing some jerk thinks it is fun to troll new Americans for New Year’s eve. 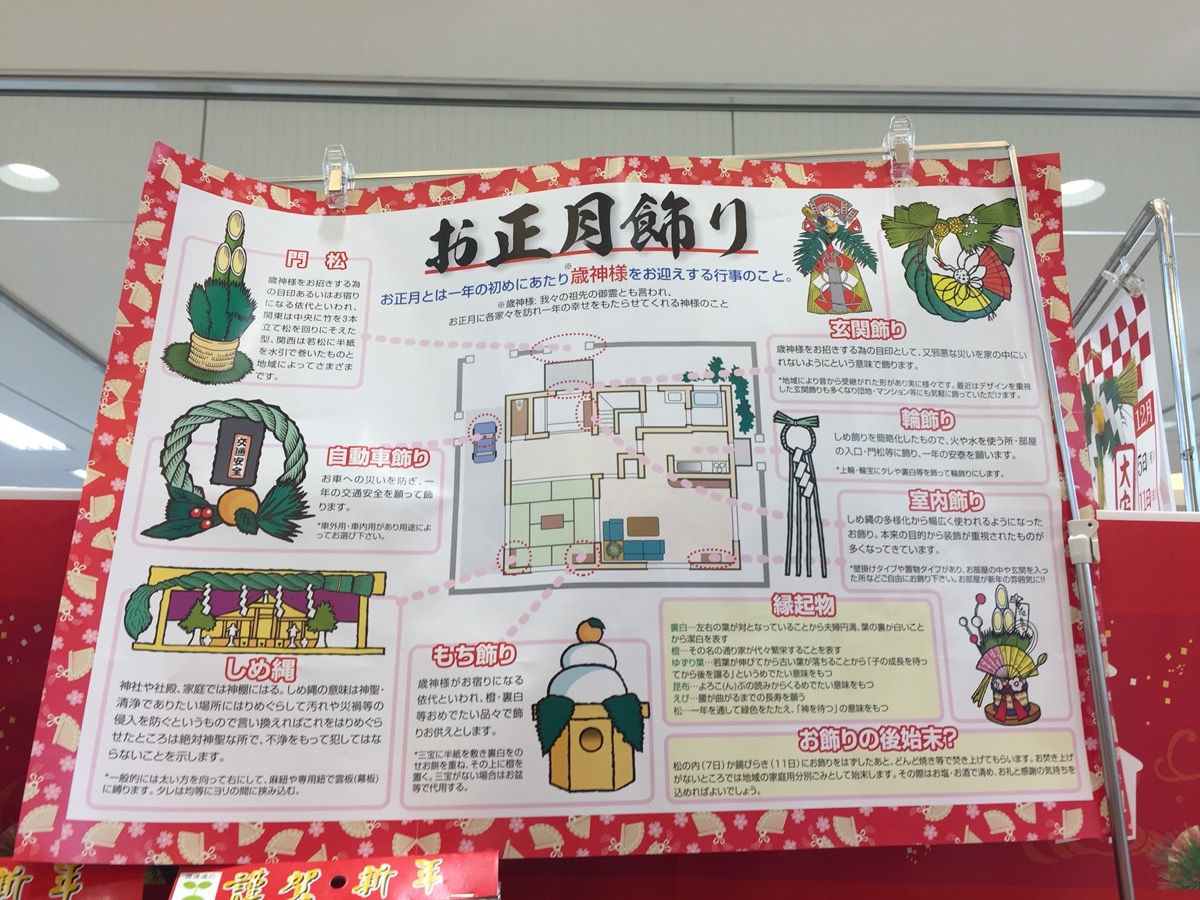 As I was shopping in SanA (grocery store), they had a nice poster (shown above) of where to put all the New Years decoration (in Japanese, but nice nonetheless). Right now there are tons of different pieces that one can purchase to get the house ready for the New Year. Some of the common decor and traditions you will see in Okinawa:

shimekazari しめ飾り: a rice straw rope wreath しめ縄 (shimenawa) with white paper 紙垂 (shide). In Okinawa, it is common to have a fairly simple straw “wreath” with a piece of charcoal wrapped in konbu 昆布 (seaweed) and an orange (mikan みかん) attached, though plenty of people also buy the fancier ones. You can even buy ones with Rilakkuma and other characters on it. This kind of thing can be placed on your door, or above the entrance to your house. It is to purify/protect the house. A more simple shimenawa rope is often placed above the family butsudan 仏壇 (altar). Some people even buy small ones and put them on their cars. I buy new ones every year, but I have heard people admit they reuse them for a few years (instead of burning it on the ritual day) and just add a fresh orange/charcoal. So again, if you buy a nice one that is too pretty (or expensive) to burn… don’t feel guilty for not burning it according to tradition.

kadomatsu 門松: 3 pieces of bamboo with pine are arranged on a circular base. Also typically placed at the entranceway, to welcome the toshigami 年神 (year deity/god) to the house (they can land on the bamboo posts). I have a (plastic-y) set that I reuse. Sometimes it is nice to buy fresh new ones, but the New Year adds up quickly. Again… you can buy them and burn them in the ritual… but don’t let anyone make you feel bad for being a little frugal. Japanese people are like this too.

minori 稔り: this is rice straw tied in a bunch. Can be placed by the altar/butsudan, but I think some people in Okinawa use these instead of kadomatsu at the front entrance. Some people may even braid their own shimekazari from these.

kagami-mochi 鏡餅: this is “mirror” mochi. I cannot tell you the number of Americans who buy one, open it, and BITE into it raw! Then they wonder why Japanese eat wax. But no… you must heat up the dried mochi! Anyway, these are stacked pieces of dried mochi with a New Year decoration (like an orange or zodiac symbol on top). This is usually placed at the butsudan /altar or kamidana 神棚. You are not supposed to open it and “break” the mirror (crack the mochi into pieces) until on Jan 11th (some regions might do different days). Anyway, on kagami biraki 鏡開き (break the mirror ceremony), open up your dried mochi that you bought and break it into pieces (you should not use a knife but mallet or something instead, but I won’t judge you if you decide knife is easier). You can heat it up a number of ways. My favorite is toast it in the microwave or toaster oven or even a grill (just a little until you see it puff up and brown), then add it to hot zenzai ぜんざい (red bean soup, you can make yourself or just buy the prepared package at SanA). Yum! You could also check online for some ozoni soup recipes お雑煮.

charcoal wrapped in kelp: 炭= charcoal, so sumi-kazari 炭飾り is charcoal decoration. In Okinawa, charcoal is very important for purification, health, and for longevity (since it does not “decay”). Pieces of charcoal wrapped in kelp and with auspicious kanji/ribbon are placed not only on the shimekazari, but also on the butsudan (altar) or the hinukan 火の神. 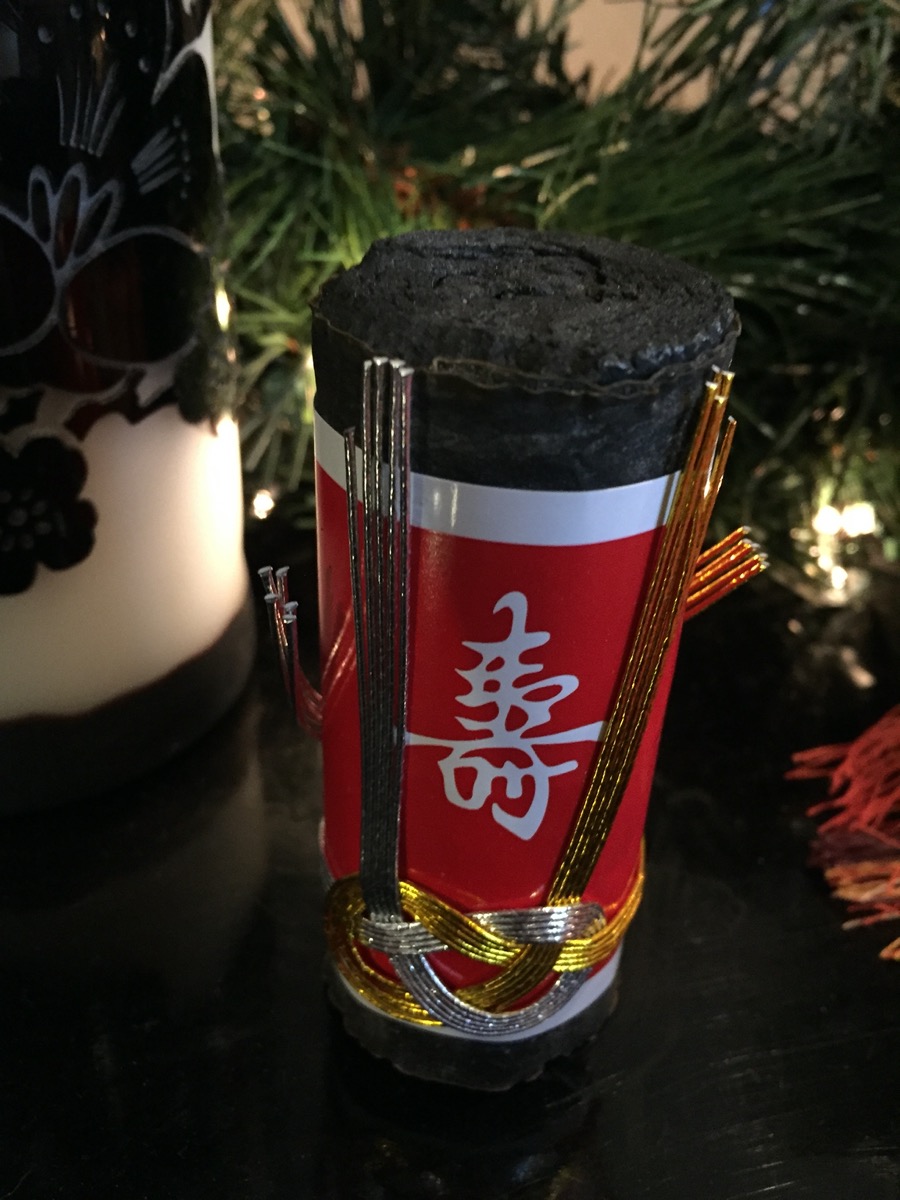 figurine of New Year zodiac animal: This year is year of the rooster and last year was year of the monkey. In recent years I have started getting the cheap Hello Kitty zodiac figurine. It is cute although I suppose not so traditional. Only 500yen at Tokyu Hands. 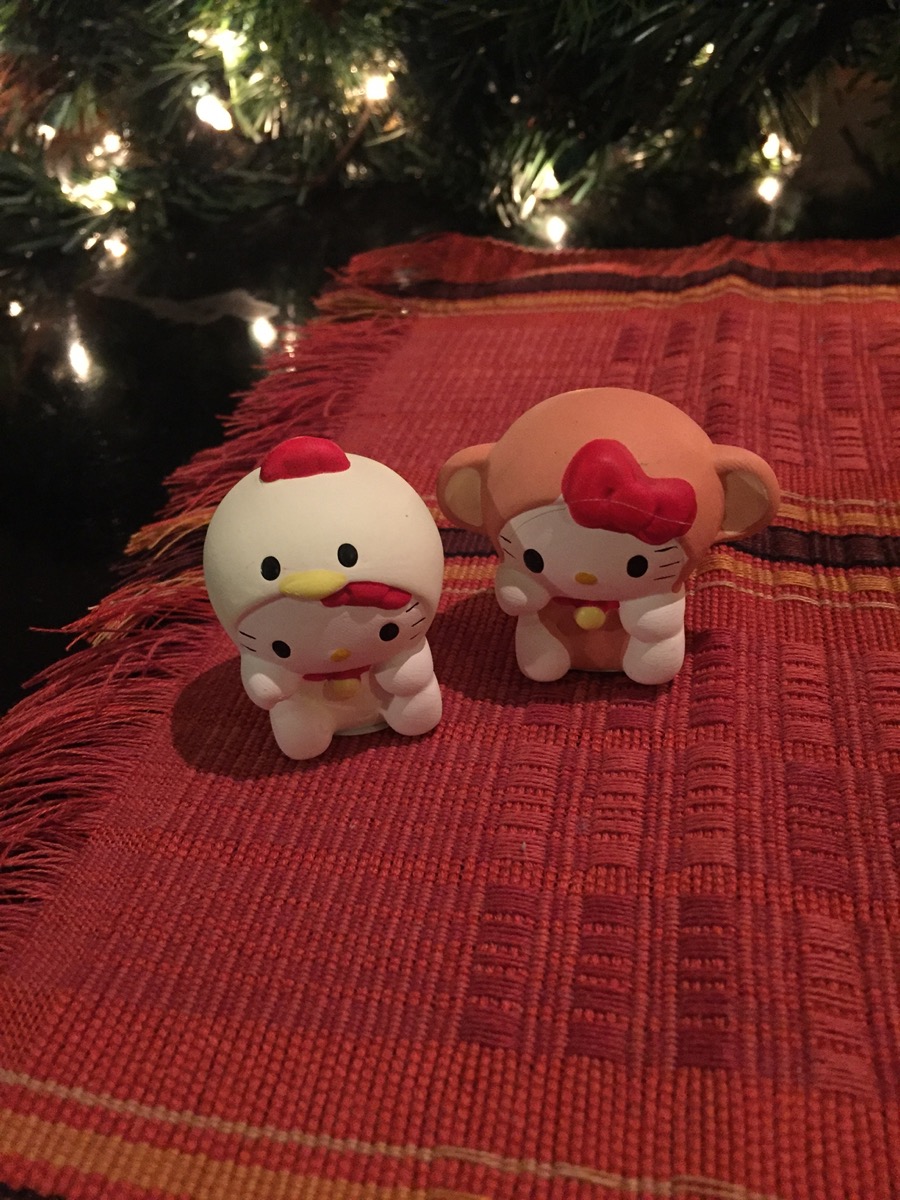 Many New Years flower arrangements will have plum blossoms, pine, bamboo, cabbage and other plants that have special symbolism for spring or the beginning of a new year. 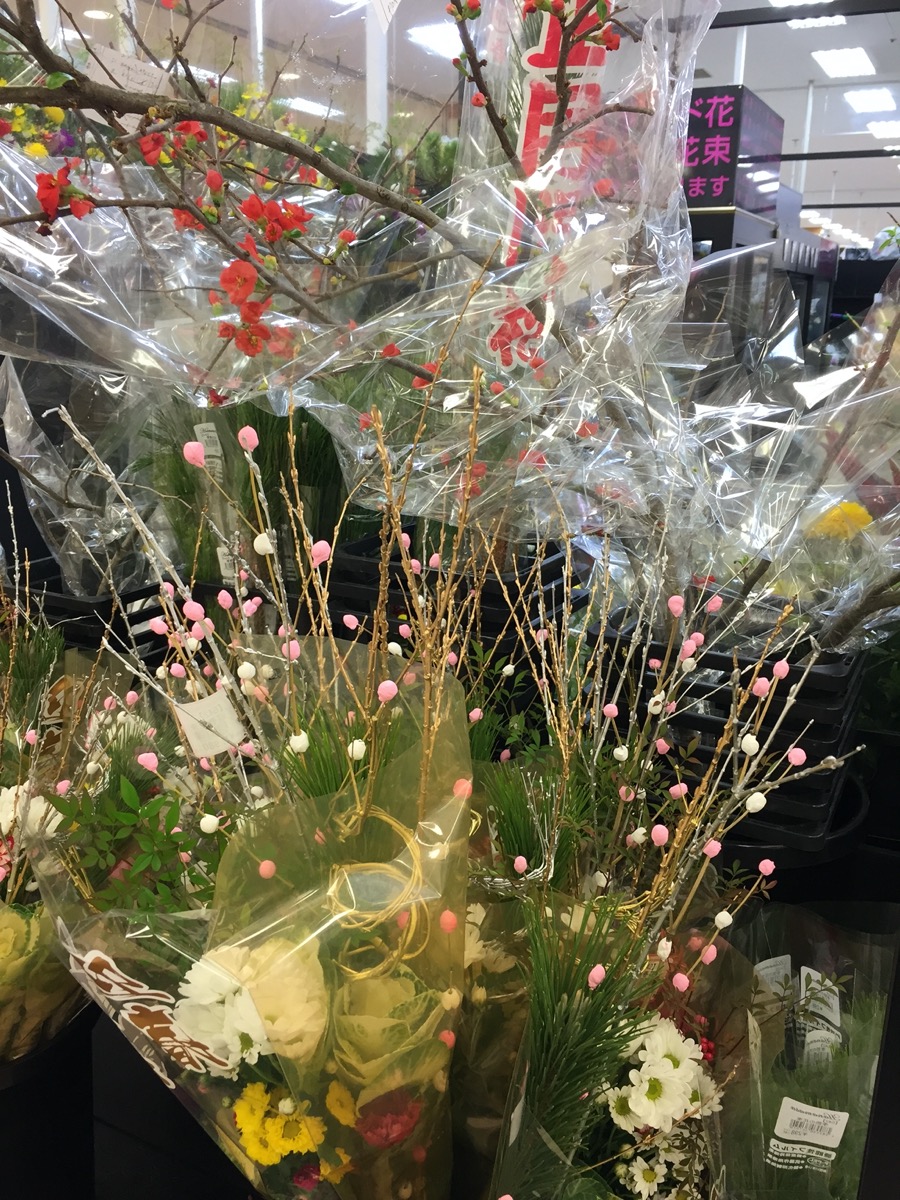 otoshidama お年玉: who doesn’t love to receive an envelope full of money? Usually this is for kids to receive. Even as a school teacher in Hawai’i I observed this custom on a small scale during the lunar New Year, and gave kids otoshidama envelopes (called pochi bukuro ポチ袋) with a chocolate coin it– no money, but a little piece of chocolate, so it was still appreciated.

osechi-ryouri 御節料理: Traditional New years food! The best part, amirite? In this modern day you will see stores bustling with pre-orders, not many people have so much time to prepare all this! Again, it usually falls on the wife of the oldest son to prepare these things (some of the ladies in my eikaiwa say it is best to marry a second son!), similar to Obon, so as you can imagine ordering a platter with all the required items from a restaurant or grocery store is much easier. There are a few traditional foods necessary for Okinawan osechi-ryouri, most of them are fried, some type of pork, or shrimps. Honestly in the stores, the fried foods and Okinawa hors d’oeuvres plates (オードブル) were flying off the shelves while the mainland-style foods were left somewhat untouched. I will try to take a few pictures this year; below are pictured more mainland Japanese types of food for New Years.

nakamijiru 中身汁 (also 中味汁): Nakami-jiru is intestines soup (pork). This is a very traditional dish for Okinawan people, but younger generations are (for perhaps obvious reasons) less inclined to eat it these days. Bags of pre-made soup (just heat and serve) and large bags of “chitlins” (pieces of intestines, pardon the American slang) are easily found in the center aisles of the store this time of year.

Winter gift, oseibo 御歳暮: just like summer gift (chuugen), all the groceries drag out the box gifts. You can buy the same types of item: spam, laundry detergent, beer, rice… and you can have them ship it to relatives afar or just have them wrap it and deliver yourself during the days leading up to the New Year. 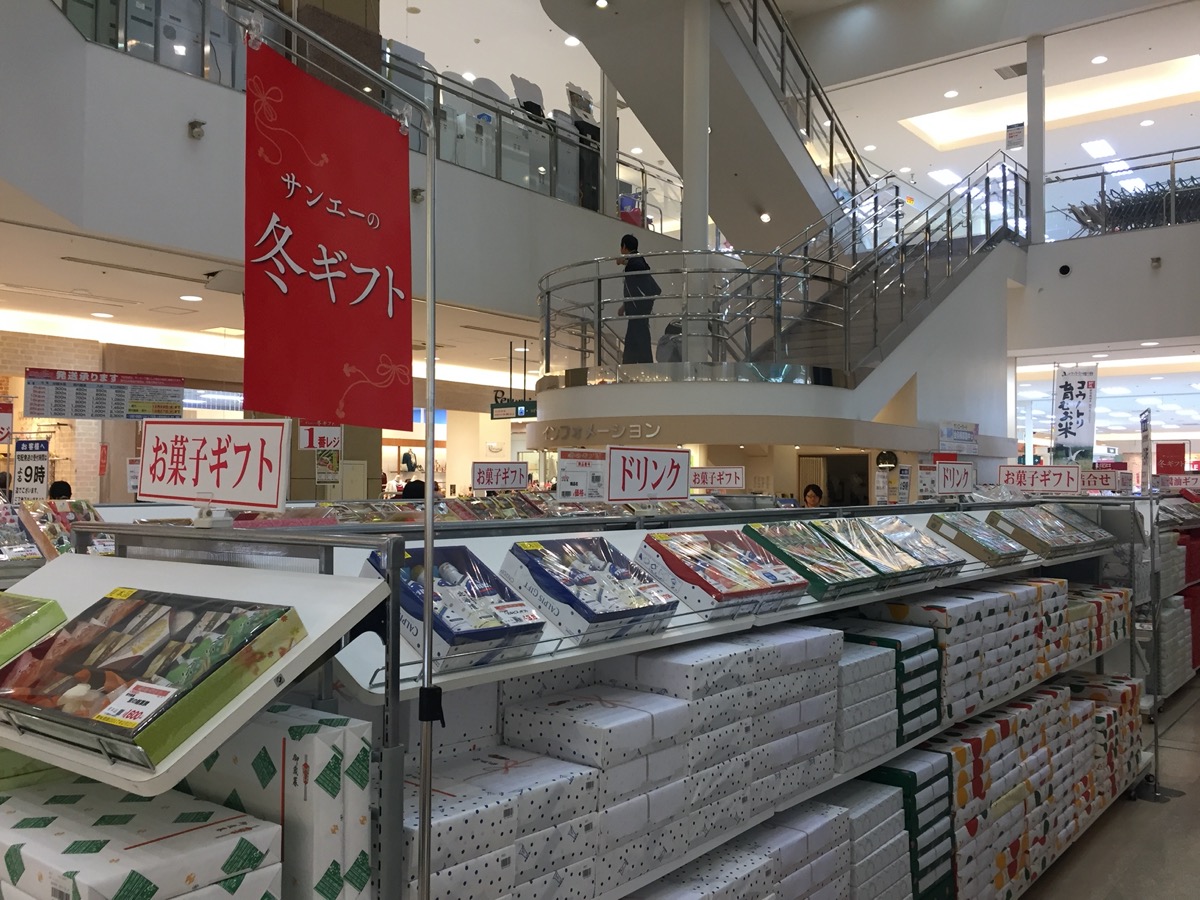 On New Years Eve, we typically watch Kohaku Uta Gassen 紅白歌合戦 (red vs white singing competition) featuring popular music artists and enka singers. Basically it is women (red) vs men (white), and while it is sort of cheesy at times (people complain about the talentless AKB48 groups), it is actually fun to have on while waiting for the end of the year. At the end, the votes are tallied and the winning team determined. Hotaru no hikari 蛍の光 (to the tune of Auld Lang Syne) is sung at the end, and then the program flashes to celebrations at New Years temples and shrines around Japan.

During the first week of New Years, especially on January 1st is the custom of hatsumode 初詣, the first visit to a shrine or temple (click here for info on shrines and temples in Okinawa); at midnight on New years you can usually hear the bells tolling 108 times. This is the time to buy new omamori お守り (protective amulets) and leave the old ones at the shrine or temple for the ritual burning. The shrines and temples are open 24 hours for the first 3 days of the New Year, so you can really go any time!

One tradition that is also very popular here in Okinawa is watching the first sunrise of the New Year, called 初日の出 hatsuhinode. Many people gather on ridges overlooking the east side of the island, and some locations have special events, such as Nakagusuku-jo ruins site. The 東太陽橋 Agai-tidabashi (bridge) by the SanA in Nakagusuku is always very crowded (this is also a popular moon-viewing spot).
And of course, the biggest shopping day of the year to score some good deals and fukubukuro (lucky bags) 福袋.

Some words/phrases you may see (or hear) a lot of:

よいお年を(お迎え下さい) yoi otoshi wo (omukae kudasai): said only before the New Year in December, basically “have a a good New Year.”

今年もいろいろお世話になりました kotoshi mo iroiro osewani narimashita: Thank you for everything you have done for me this year. Said before the New Year begins.