夏祭り natsu matsuri means summer festival (I wrote a little about this before).

Of course, no summer matsuri is complete without the food tents, called 屋台 yatai. Most popular are probably the fried and grilled foods; some of the more “traditional” ones that I have seen in Okinawa are listed below. Just be careful not to stain your yukata…

**I will try and add some more pictures of all the foods as I have time. 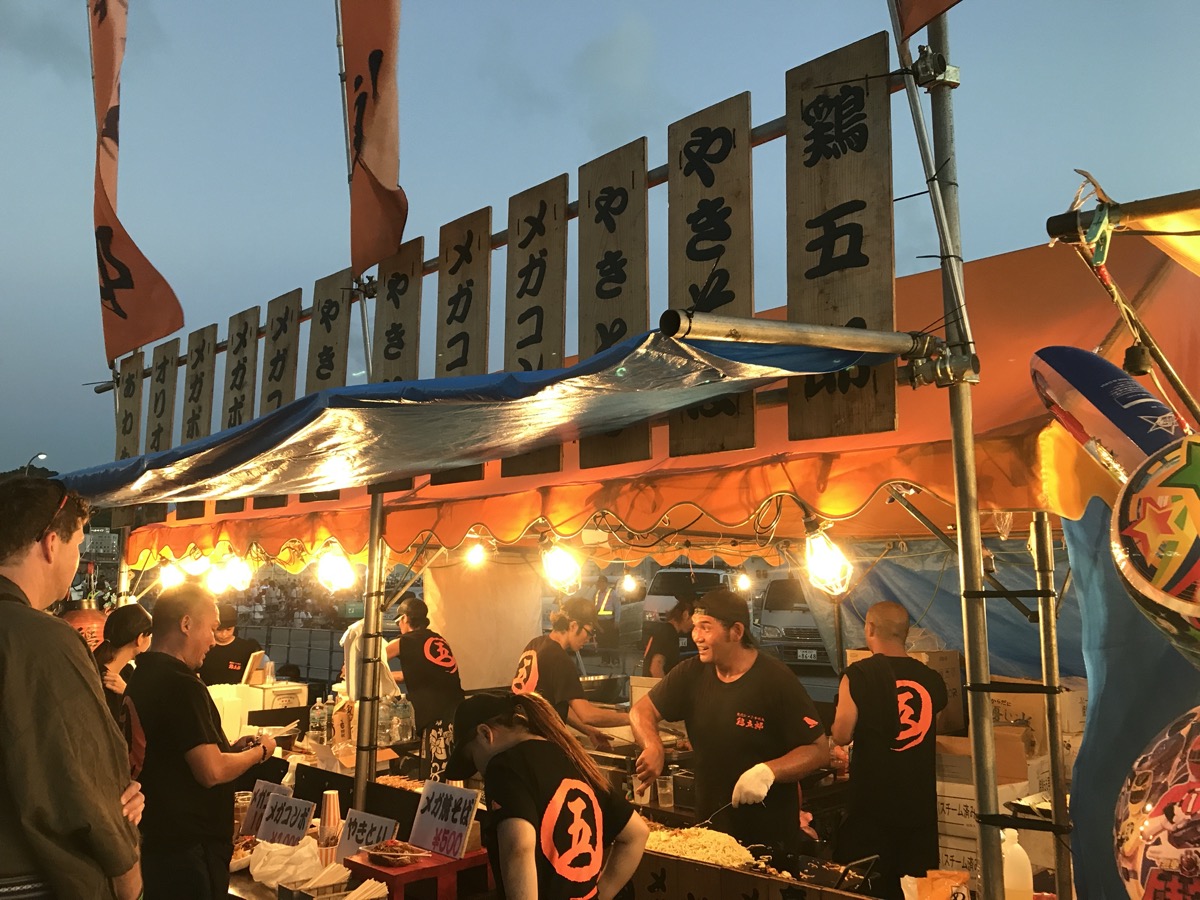 Yakisoba 焼きそば : fried noodles. Usually at summer matsuri, I see Japanese sauce yakisoba rather than Okinawan salt yakisoba, but it depends on the festival.

Takoyaki たこ焼き: fried octopus balls. Round dough balls with bits of octopus mixed in and fried, then topped with sauce and usually katsuobushi.

(Yaki) toumorokoshi (焼き)とうもろこし: corn; in this case it will be grilled and slathered with butter.

Recently we went to a matsuri in Nago and split a mega-combo メガコンボ, which came with a mix of potato fries, yakisoba, takoyaki, and yakitori. It was a popular food tent, and everything was cooked piping hot on the spot. It was nice because it came with a small(ish) serving of a bunch of different foods for variety, and a good compromise for my husband and I to split.

Some food tents are starting to offer some more western choices, like “meat pies” which I think are kinda like empanadas. Often you also see アメリカンドッグ  “American dog,” which just means a corn dog.

You might also see some “local specialties,” which in Okinawa typically means soba. Each festival has its own wide array of foods to try, and we enjoy trying as many as possible. On the mainland I have seen way more variety of matsuri food, and some really interesting looking ones. So keep in mind since this list is mostly applicable to Okinawa, I have only included the ones most common in Okinawa.

And of course, there is more than just savory foods… plenty of sweets as well.

In Okinawa, the drink selection is typically some canned soft drinks (though don’t expect much variety beyond water, green tea, and coke), draft Orion beer, and of course, the local booze, awamori.