The other day I was in the Naha area, and craving a snack. And what did I come across, but this cute little place called Sennichi. They sell Okinawa soba, zenzai, shave ice, and taiyaki~

The red bean filling inside the taiyaki was perfect, and 1 piece for only 110yen! Ono!

You can eat there or take out.

Yuntaku Cafe Wan ゆんたくカフェWan is a very small “cafe” located in Kunigami 国頭村 (Northern part of Okinawa) that specializes in croissant taiyaki. It is located near the Okuma resorts.

When you first pull up, it is super charming, and there is a faithful dog who comes out to greet you. The lady inside is very friendly and has built the shop along with the various tables and such herself~~ she is a superwoman! There are some outdoor spaces for eating, or you can get takeout.

We purchased 3 taiyaki to go: sweet potato, potato salad, and bitter chocolate. We then proceeded to the seawall to indulge while enjoying the unusually beautiful weather and the view.

Anyway, these croissant taiyaki are by far the BEST I have had in all of Okinawa! It was definitely worth the drive. I definitely recommend both the sweet and the savory versions, they were all amazing. Even my husband regretted not getting more (we bought 3 total) after tasting them; he initially rolled his eyes at the idea of taiyaki when I first suggested it, but I remained firm as I really wanted to try this place after I had seen some pictures online. Once he tasted it, it couldn’t believe how delicious they were. The owner won an award for these delicious treats, and we can definitely understand why after tasting them. These are far and above soooo much better than the croissant taiyaki that the Gindaco chain serves!

If you have read any previous posts, you are probably aware of my love (obsession?) with Japanese-style sweets. So this will be yet another entry dedicated to the wonderful world of Japanese sweets.

Today is about taiyaki たい焼き and dorayaki どら焼き. Neither of these are especially popular in Okinawa, and are probably a little more common on the mainland, however there are some places in Okinawa to find these tasty treats.

Taiyaki is a fish-shaped pastry with a filling inside, usually sweet bean paste (an). There is the traditional type, with many different filling choices, at a small stall in the basement food (depachika デパ地下) floor of Ryubo department store in Naha (also known as Palette Kumoji). My favorite is probably the kinako きな粉 (toasted soy bean); it is creamy kind of like peanut butter inside. There is also a new fad of “croissant taiyaki,” (クロワッサンたい焼) which is a flaky twist on the traditional favorite. This is actually easier to find in Okinawa since it is sold by the chain takoyaki store, Gindaco 銀だこ. I prefer the traditional style, but the croissant taiyaki is okay, too. Whenever the Kyoto products fair comes through the stores, there is almost always the Le Mans booth which sells many flavors of this croissant-style taiyaki– I like this better than the Gindaco ones, personally.

**Recently, I have had an incredibly delicious taiyaki at Amane 天音 near Kichijoji station in Tokyo! I 100% recommend stopping by and trying it if you are ever in that area! 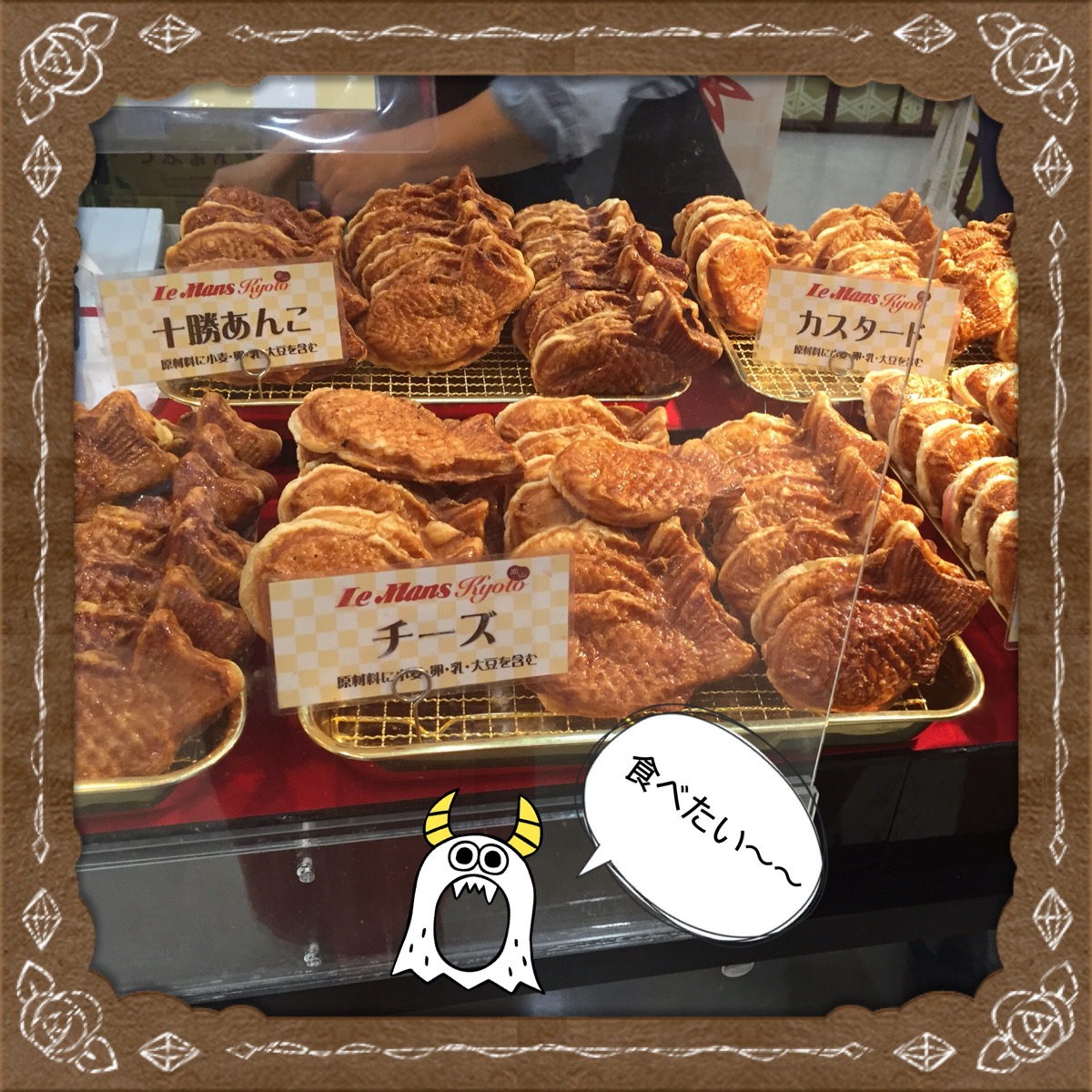 Dorayaki is like 2 little tasty pancakes with a filling between them, again, usually sweet bean paste. But they are not quite pancakes or hotcakes… they usually have more pockets of air creating a nice fluffy texture, and the batter is usually sweetened with honey. These are ALL over, you can even find these in the convenience stores (like Lawson)! Some are even “Okinawa-style” since they use Okinawan kokutou 黒糖 (brown sugar). I will have to think about where my favorites are located… probably just the small booth that sets up outside the local grocery store once a month since there are always so fresh!

You can also find some small dorayaki at a specialty shop that also sells ohagi: here.

Culture note: Some people say how you eat taiyaki tells about your personality:

The person who eats the head first is an optimist.

The person who eats the tail first is a romantic and detail-oriented.

The person who eats the fin first is sensitive.

The person who eats by tearing it in half is a man of action.

A majority of people seem to eat the head first, but funny enough I usually eat the tail first.