In a previous post, I talked a little about Setsubun, the bean-scattering ceremony. This year, I went to the setsubun-sai (festival) at Naminoue Shrine, which is held on February 3rd. It was a grey and cloudy day, with a bit of a chill. My husband and I parked the car a few blocks away from the shrine and stopped at a conbini for coffee.

We walked up to the shrine a bit before 10am (the starting time), and with the overcast weather, it was busy but not as busy as New Years hatsumode. It started promptly at 10am, with some prayers and rites of various sorts. Next came the shishimai (lion dance), which is always a lot of fun. Finally it was time for the bean-throwing!

Now what surprised me about this festival was that they didn’t just throw beans… they threw oranges, candies, and little bags of snacks/toy as well! It was crazy, but entertaining. Again, like the Naritasan fukusenji festival, some people had bags and baskets, or used their hats, to help catch the flying prizes. After everything was thrown, the local news interviewed kids to see what all they caught. They also handed out hot zenzai (sweet red bean soup) at the shrine window~~ so as soon as the throwing is done, get in line before they run out of zenzai!

Overall, it was a lot of fun and not as crowded as I feared. So if you are in Okinawa during Setsubun, be sure to check out Naminoue Shrine’s festival!

You can also wait until Feb 11th (public holiday in Japan) for Naritasan Fukusenji’s bean-throwing festival. Since Naritasan fukusenji is my local temple, I typically attend the events there; this setsubun festival is a lot of fun too, though not as big as Naminoue shrine’s, and they only throw beans at this one. Plus at Naritasan, the sakura are usually blooming well, so the temple looks very pretty this time of year.

Naminoue Shrine 波上宮 in Naha has a large Setsubun festival held on Feb 3rd, 10am, every year; it is shown on the news: https://goo.gl/maps/sLP2LHodzT92

There are many types of beans that you can find here in Okinawa and Japan. Listed below are a few common examples (but by no means an exhaustive list, there are other varieties available).

枝豆 edamame: soybeans. Of course these can also be dried, or used to make things like tofu and soymilk.

納豆 natto: fermented, slimey and somewhat smelly beans. A typical breakfast item eaten with rice, or sometimes found in a maki sushi roll. Most people either love it or hate it, but it is supposed to be really healthy. By the way, my (American) husband loves it… he can be strange. There is even a variety for “kodomo natto” こども納豆 (children’s natto) that is more mild if you want to give it a chance, this might me your best bet.

Beans seem to be incredibly prevalent in Japanese and Okinawan culture, whether eating beans for good luck or good health, or using them for warding of evil or scaring away demons, beans seem to have some mystical property.  Setsubun 節分, bean-scattering festival, is one such example in February.

In Okinawa, there is also the tradition of eating a special mochi covered in beans called fuchagi ふちゃぎ during Autumn as way to ward off evil.

It is typical to eat sekihan 赤飯 (literally “red rice”) during Shinto rituals throughout the year; it is mochigome (mochi rice) mixed with red azuki beans (recipe for a version of kowameshi similar to sekihan here). The color red is a symbol of happiness and celebration.

On New Years, some of the lucky foods in osechi-ryouri おせち料理 are cooked sweetened beans, such as kuromame; in Japanese “mame” also sounds like the word for “hard work and good health,” so eating this during New Years is a symbol of good health for the upcoming year. 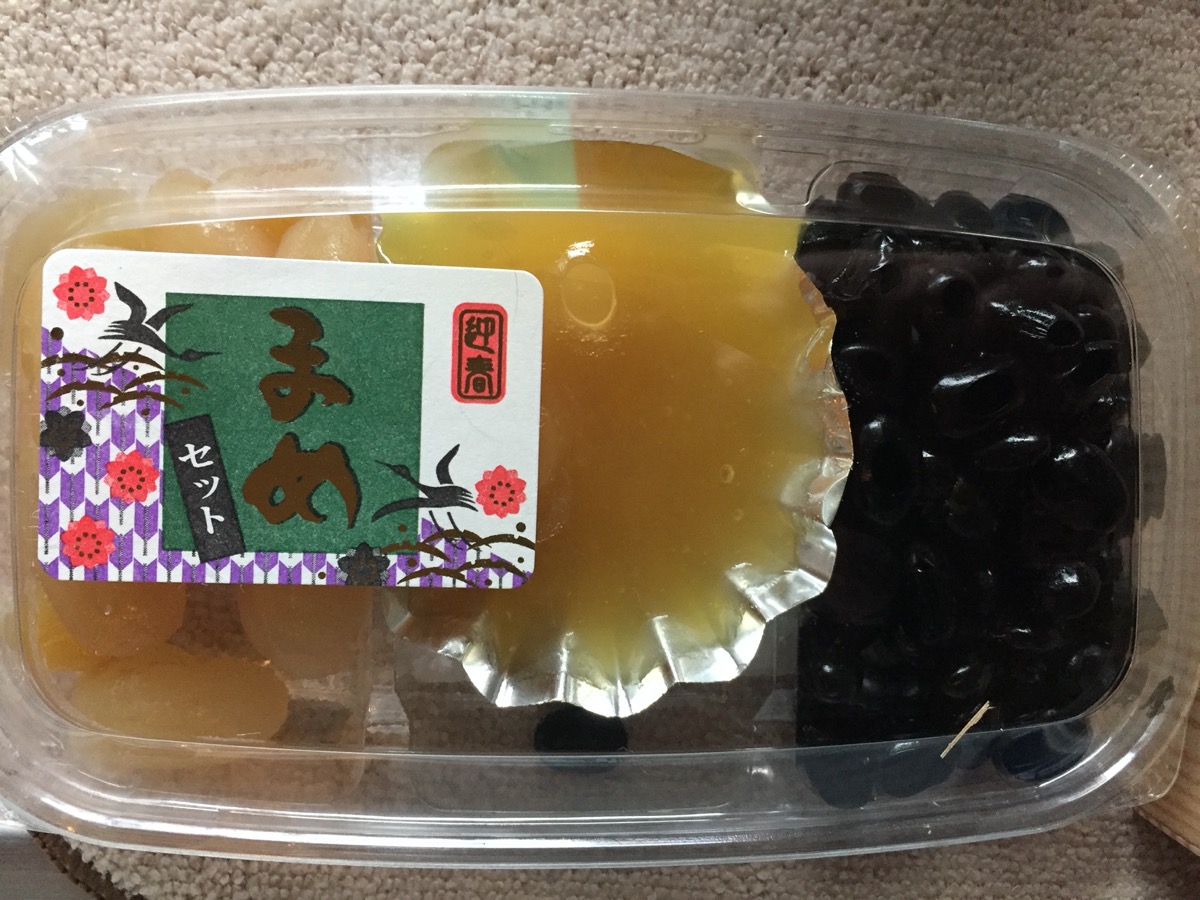 My husband pointed out to me that sweetened beans found in many Japanese desserts and sweets are unusual for many Americans. I found this odd since I really like them and never considered this to be a strange idea; red bean desserts can be found easily in Hawaii. He said that it has something to do with the texture, but I am uncertain. Living in Okinawa has increased my love for beans even more, I think.