I finally stopped for lunch at a cafe I have passed dozens of times, but never really noticed before. The building is aging a bit, and the sign was never very obvious; I vaguely knew there was something there, but never really sure if it was open or not.

The name in English is “The 3 Little Pigs,” like the fairytale. Inside was a little eclectic, with some piggy decor and other random things, but quaint and clean. There are 9 parking spaces outside the cafe, too, so plenty of parking available unlike some other places. After I arrived, several tables starting filling up fast. I was a little surprised, but apparently many local people know about this place!

Anyway, the menu is in Japanese and the staff probably only spoke Japanese, though there was a mix of kana and kanji on the menu, you can probably stumble through with minimal knowledge of Japanese. I ordered the cheese and egg sandwich (which also came with a mini yogurt)), as well as the cake/drink set. You can choose from 5 different cakes and between coffee, tea, or soft drinks. I chose the coffee cheesecake and hot blend coffee.

Service was fairly quick, and the food was really good! Plus it was a good price: 600yen for the sandwich set, and 750yen for the cake/drink set (the drink included 1 free refill). I was impressed overall. This is definitely a nice stop for a decent lunch in Ginowan.

Oh, and the bread made in shop is gluten-free! I don’t know that most menu items were actually gluten-free, but they sold small loaves of their bread at the counter~~ Also the main dishes use genmai 玄米 (brown rice) instead of white rice to be a little healthier!

Near 2 of the military bases in Ginowan, Futenma and Foster, there is a small confectionary shop next to the Union grocery store. It is called “Asahi-ya” あさひ屋.

When you pull up, you may not notice the small sign for “parking” at first. It is really just one space next to the shop, by the sidewalk. There is a sign indicating you should pull your car all the way in and not block the pedestrian sidewalk. Or you could just park at the Union since it is next door.

When you enter, it is not much to look at, and may seem a bit dated. There is a small area where you can eat-in or you can take out. They have whole cakes, cake slices, and even some Japanese and Okinawan style confections. The cakes may not look super impressive at first, at least not compared to some of the expensive and trendy shops, but if you look closer you will notice they have a lot of different flavors and types.

On this day, I purchased a shikwasa mousse cake slice… it was delicious and decently priced! The slice was 195yen, which is not too bad considering what some of the other shops charge. I would definitely recommend stopping into this “retro” cake shop and trying a slice of cake! 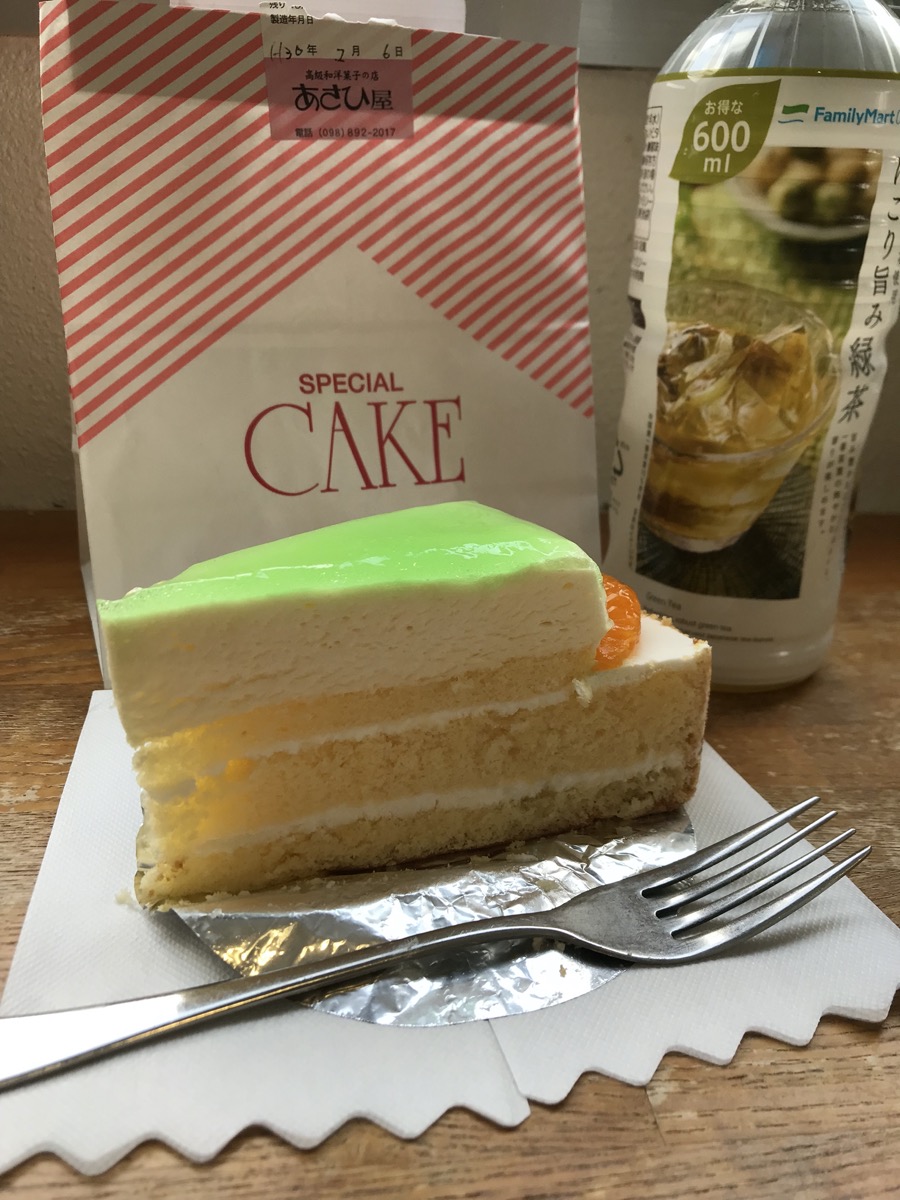