This small yet popular cafe is located in Itoman, not too far from the Ashibinaa outlets area. They offer raw food, vegan and gluten-free menu choices. They also have a vegan/gluten-free sweets counter for takeout.

There is a parking lot next to the building, park in the spaces labelled for the cafe. The inside of the cafe is not very big, but there are a few tables. They have a variety of fresh lunch choices, as well as some smoothies and desserts. While the bill is not cheap, this detox cafe offers some delicious and unique choices here in Okinawa, so I still recommend it. Today we tried the raw food lunch set with the veggie norimaki rolls and the curry lunch plate. I also decided to add on a raw food “rainbow cake” for dessert.

Overall, everything was really good, so if you are looking for a healthy option in the southern part of the island, this place will not disappoint. 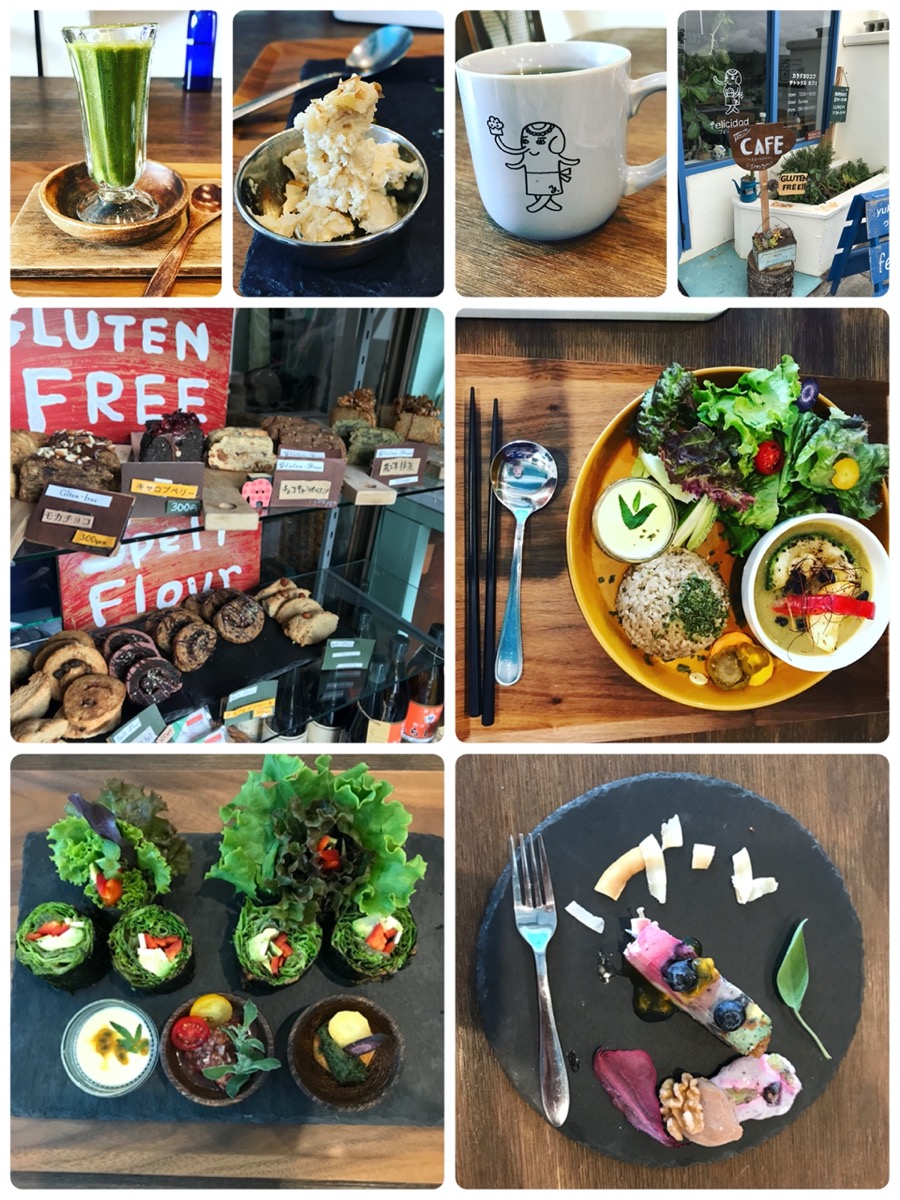 A new shop in Okinawa has opened up, conveniently right next to my university gate. It is called “Citta” and they specialize in vegan and gluten-free snacks, like crackers, cookies, and cakes.

I went to visit this clean, bright shop the other day. The price tag is not particularly cheap, but not unreasonable considered it is handmade specialty goods. While I was there I also ordered a soy latte, which was really tasty. I took home some shikwasa cookies, tomato and basil crackers, and asa (seaweed crackers). Everything was really good, and went well with tea that afternoon. Not all their products are gluten-free, but many area. Everything was made from all-natural ingredients and vegan. I definitely recommend checking it out if you have these type of special dietary needs, as it is uncommon to find this type of shop normally in Okinawa.

I finally stopped for lunch at a cafe I have passed dozens of times, but never really noticed before. The building is aging a bit, and the sign was never very obvious; I vaguely knew there was something there, but never really sure if it was open or not.

The name in English is “The 3 Little Pigs,” like the fairytale. Inside was a little eclectic, with some piggy decor and other random things, but quaint and clean. There are 9 parking spaces outside the cafe, too, so plenty of parking available unlike some other places. After I arrived, several tables starting filling up fast. I was a little surprised, but apparently many local people know about this place!

Anyway, the menu is in Japanese and the staff probably only spoke Japanese, though there was a mix of kana and kanji on the menu, you can probably stumble through with minimal knowledge of Japanese. I ordered the cheese and egg sandwich (which also came with a mini yogurt)), as well as the cake/drink set. You can choose from 5 different cakes and between coffee, tea, or soft drinks. I chose the coffee cheesecake and hot blend coffee.

Service was fairly quick, and the food was really good! Plus it was a good price: 600yen for the sandwich set, and 750yen for the cake/drink set (the drink included 1 free refill). I was impressed overall. This is definitely a nice stop for a decent lunch in Ginowan.

Oh, and the bread made in shop is gluten-free! I don’t know that most menu items were actually gluten-free, but they sold small loaves of their bread at the counter~~ Also the main dishes use genmai 玄米 (brown rice) instead of white rice to be a little healthier!

I am personally not gluten-free, so I don’t really know all the “ins-and-outs,” but I can give a little help in finding some gluten-free and wheat-free items in Okinawa.

This can be difficult because I don’t think gluten-free is really a thing in Japan. But luckily, in SanA there is the “special dietary” section, and you can find a few items here… some are even labelled in English (!!). This is in the same section as the soy-free section I posted about awhile back. In some other stores, the items might be spread around and you have to look a little harder for the key words and ingredients.

As for items like shoyu and miso, wheat is often used so you have to look carefully and clearly for the no-wheat label, and check the ingredients. Luckily wheat is one of the 7 REQUIRED food allergy labels in Japan, so at least it is easy to identify if there is wheat or not in the ingredients! On the back of the product there is an allergy section, and if the product contains wheat it will be highlighted clearly. Gluten-free miso and shoyu are not usually in the special dietary section, so you may need to check the regular shoyu and miso aisles.

Rice flour and rice noodles (as well as some other types like konnyaku noodles, aka shirataki) are easy to find in most supermarkets, so gluten-free living in Okinawa should not be too much of a challenge.

phrases to look for:
グルテン入ってない: no gluten
小麦不使用: no wheat (or more literally wheat non-use)
＿＿＿不使用: no ______

Hopefully this gives a start as to what to look for in the grocery stores if you are looking for a gluten-free diet or a diet with wheat allergies, but this is NOT a comprehensive guide. If you would like to more know words to look for on packages or know of any I missed, just add a comment and I will update the post with more information. Depending on the degree of the gluten or wheat allergy, you may want to consider getting one of the translated restaurant allergy cards for when you would like to eat locally, especially since gluten-free and gluten allergies are relatively unknown to most Japanese.