A new shop in Okinawa has opened up, conveniently right next to my university gate. It is called “Citta” and they specialize in vegan and gluten-free snacks, like crackers, cookies, and cakes.

I went to visit this clean, bright shop the other day. The price tag is not particularly cheap, but not unreasonable considered it is handmade specialty goods. While I was there I also ordered a soy latte, which was really tasty. I took home some shikwasa cookies, tomato and basil crackers, and asa (seaweed crackers). Everything was really good, and went well with tea that afternoon. Not all their products are gluten-free, but many area. Everything was made from all-natural ingredients and vegan. I definitely recommend checking it out if you have these type of special dietary needs, as it is uncommon to find this type of shop normally in Okinawa.

You will see these types of snacks many places, usually by the alcohol section of the grocery or convenience store.

It comes from the word tsumamu つまむ, which means “to pinch” but can also mean “to pick up with fingers or chopsticks.”

It really is not anything specific, just sort anything easy to eat while drinking (beer, alcohol, or even just soft drinks) can be considered otsumami. You could include any kinds of appetizers, finger foods, light snacks, and tapas as “otsumami.” I usually think of things like arare or senbei, but many other things like cheeses, dried squid, edamame, tsukemono, and all manner of appetizers are described by the word “otsumami.”

Often on the airplane, I am given a small bag labelled otsumami, usually some sort of arare, dried peas, or kaki-no-tane. So I don’t always associate otsumami with drinking alcohol necessarily, rather I think of it as a salty snack food.

In Okinawa, a popular otsumami is mimigaa ミミガー (dried and shredded pig ears); to be honest it does not look creepily like pig ears, so if you don’t read Japanese or are unfamiliar with Okinawan words, you probably would not realize exactly what you are eating. I like an otsumami made by Orion labelled “beer nuts”: ビアナッツ. They even sell it as a small omiyage. When you are in Okinawa, you should try some of these Okinawan otsumami. 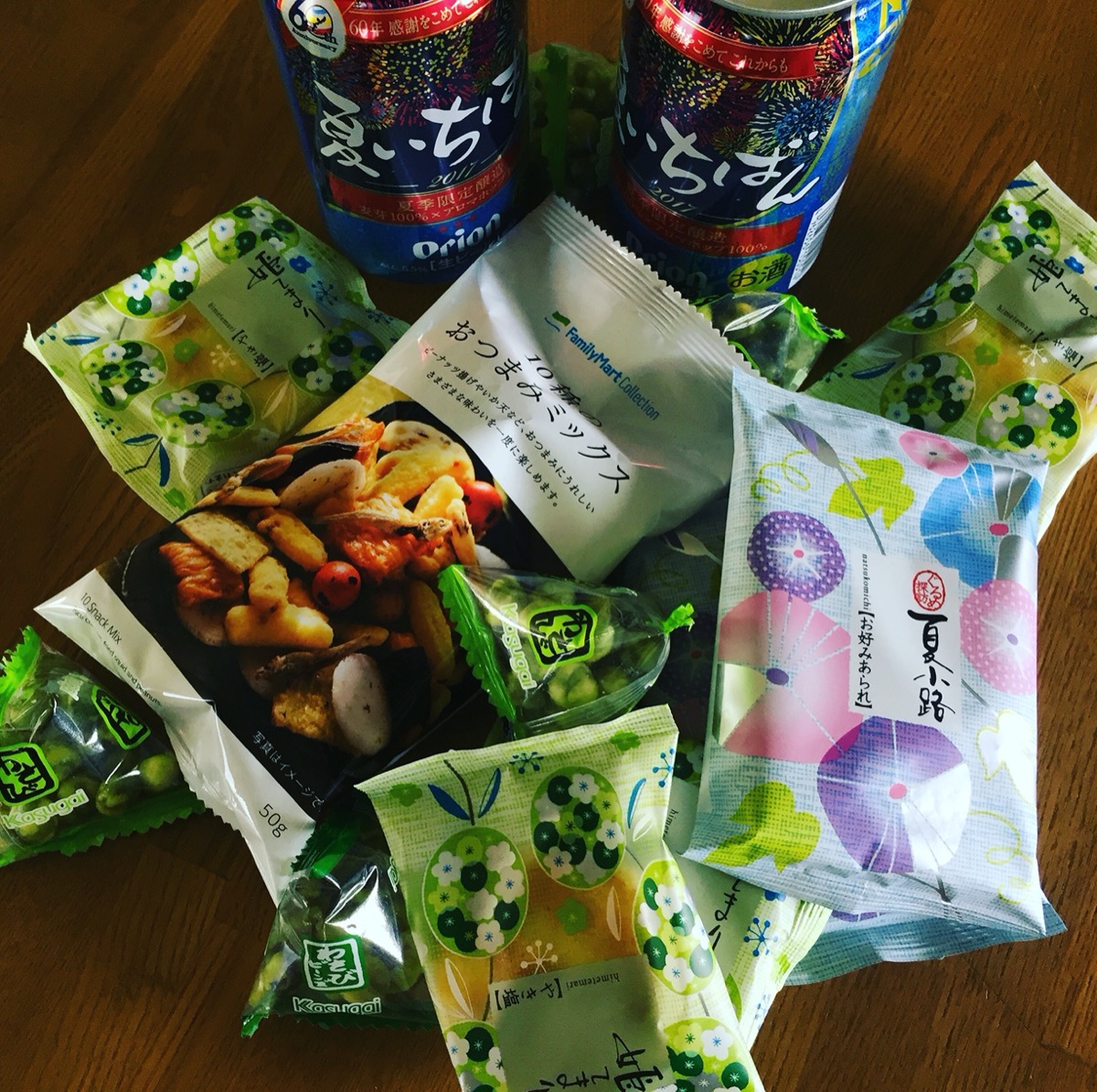 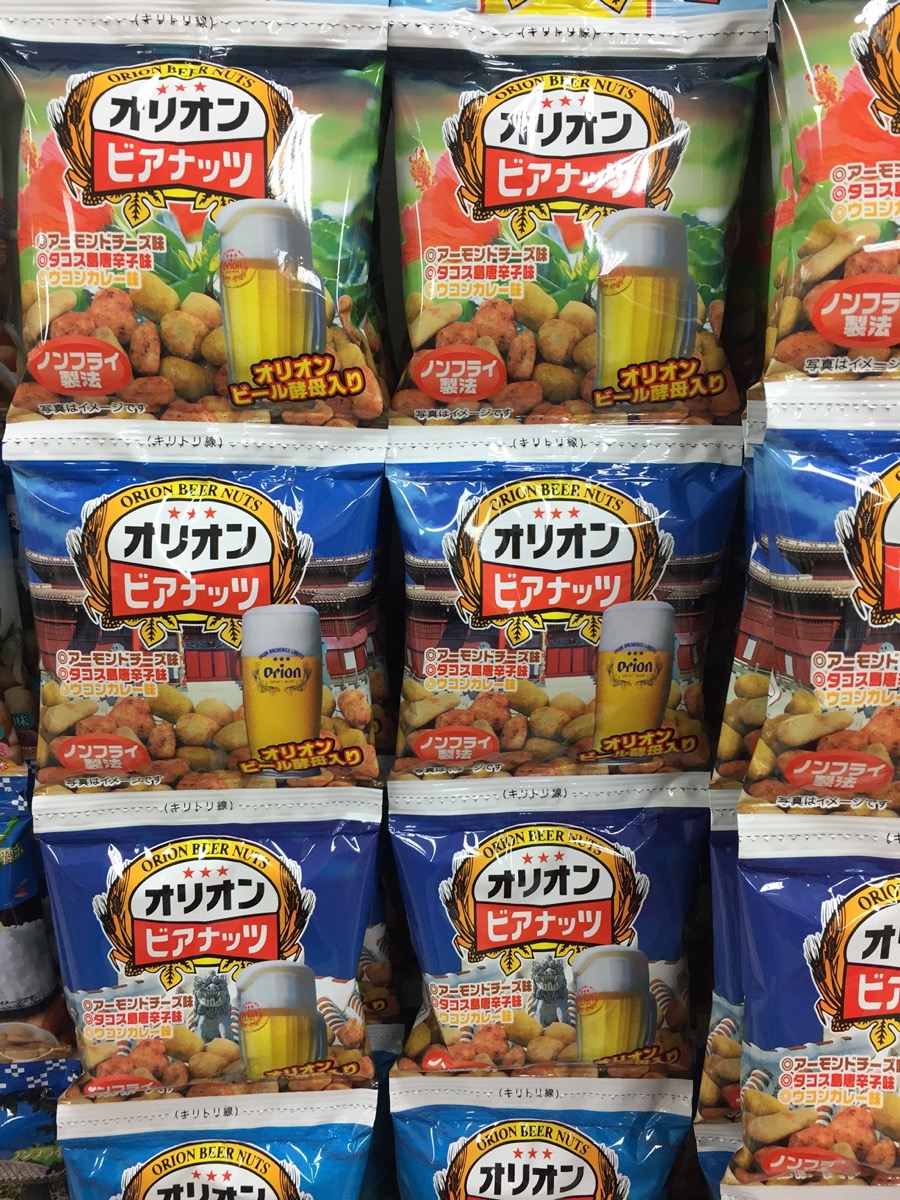 梅干し umeboshi: plums that are dried then pickled, sometimes known as “salt plums” or just “pickled/preserved plums.” It is a type of tsukemono 漬物, pickled side dish. These are in a “wet” state usually.

干し梅 hoshi ume: dried umeboshi… so yes, plum that has been dried, then pickled, then dried again, so there is very little moisture. The difference may seem confusing, but this is more of a candy version for snacking, rather than a side dish for a meal.

In Hawai’i, li hing mui is popular (“li hing” is a sweet/salty/umami powder and mui is “plum”). It is similar to hoshiume, as they are both dried preserved plums with salt and sugar, but they are covered in li hing powder which is super ono. But I think it is also a more intense flavor than just regular hoshi ume.

Anyway, I am no stranger to these types of dried salted plum snacks. In Okinawa, there is a brand of umeboshi snacks called Suppaiman スッパイマン. “Suppai” means “sour” so it is sort of a play on words. They are a nice treat and impart a sort of salty/sour flavor with a little bit of sweet. I highly recommend when you are in Okinawa to try them… or anywhere in Japan that sells this brand, I heard some people in mainland like these. Suppaiman also has other types of umeboshi candy, too. There was even a Blue Seal collaboration where it was a featured ice cream (sherbet) flavor of the month! Hopefully it will return… I find the the sour flavors so refreshing.

Right now in stores, you will see green ume 青梅, along with white liquor, rock sugar, and various containers all in the same area. It is that time of year when people make their own plum wine and umeboshi. Some people in Okinawa use awamori to make the plum wine instead of clear liquor. It will take quite awhile until they are ready for eating/drinking, so patience is key if you want to make your own. I have none of this patience, so I tend to buy mine rather than make at home.

Around this time in stores you will see a variety of snacks and chocolates with cute ema boards 絵馬 (the message boards like you see in a shrine or temple) or omamori お守り (good luck amulets) and places to write messages on them. Why is this? What does it mean? Well, this is for people to write messages of encouragement to exam students! School exams to get into high school and college are notoriously difficult in Japan, and students will go to cram schools, spending many hours studying. What better when you are tired and stressed from studying than snacks and messages from family or friends?

You may see phrases such as:

Especially popular are kitkats キットカット because it sounds like “you will surely win!” which has been a popular campaign for them in Japan. Many packages will also have sakura (cherry blossoms) decorating them as well; sakura bloom in April, when students will (passed their exams) be entering new institutions of learning, so it is sort of a symbol of hope and success.

Some packages will even be a little funny, with images of strength or someone studying hard. The picture below has Gari勉Zap, 勉 ben is the character for endeavor or to make a great effort (also seen in the word 勉強 benkyou meaning study); this candy bar playfully means to increase your study ability. I bought this for my friend working on her thesis back in the US. The bread I bought from my university conbini, it has the kanji 単位 “tan’i” for “credit” or “unit,” as in to pass semester exams and earn credits towards graduation. Students eat it to feel encouraged to study for end of the year exams and gain school credit towards graduation.

So if you know someone taking exams, why don’t you buy one of these snacks and write them an encouraging message?

This year I found these adorable daruma だるま designed baby-star ramen snacks (chicken flavor with sakura bits in them): 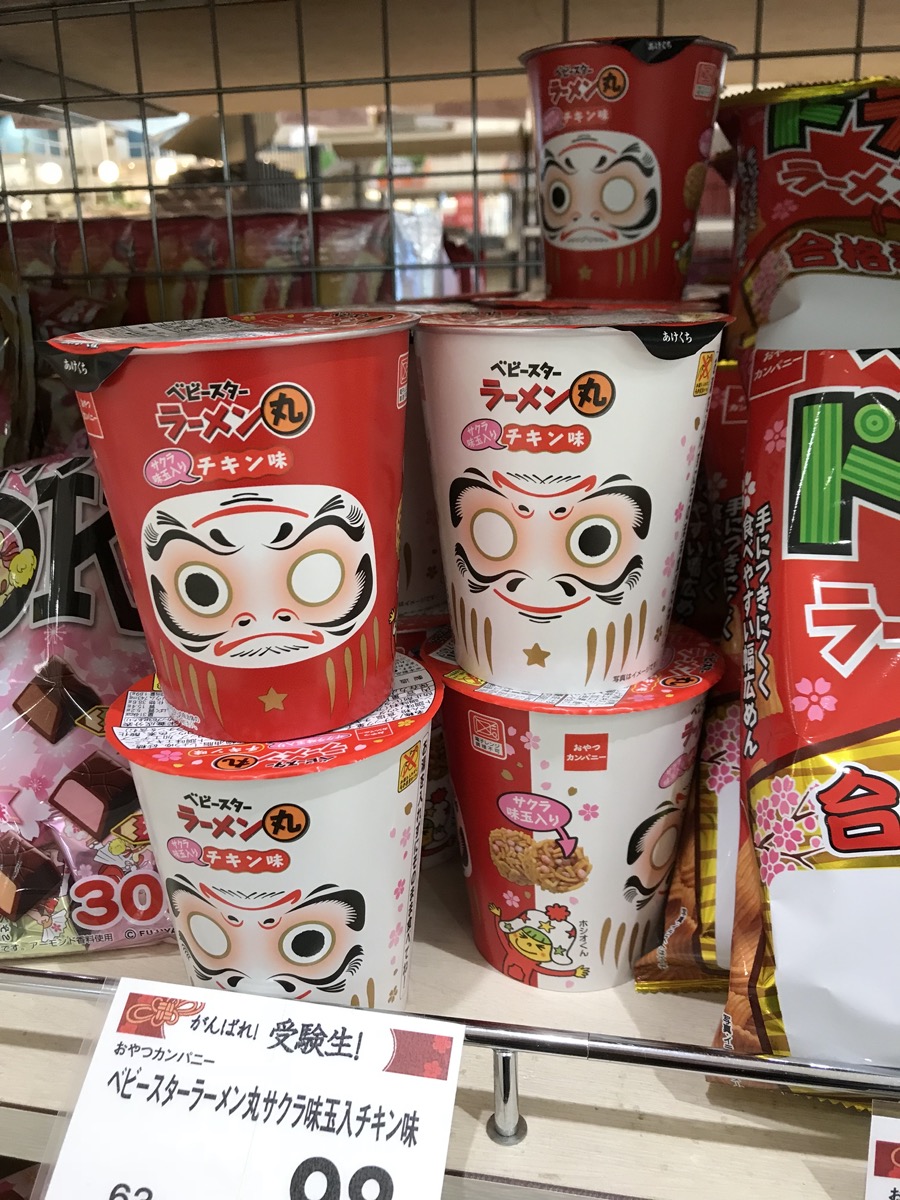