Awhile back, on a beautiful warm day, I was on my way towards the bridge that connects Henza-jima, Miyagi-jima, and Ikei-jima. The weather was so nice, I could not help myself and I stopped for gelato at Uruma Gelato. Obviously gelato is not traditionally common in Okinawa, but it has started to gain a lot of popularity in recent years.

There are many flavors like beniimo, Okinawa brown sugar, shikwasa… but I ended up with Yamashiro koucha 山城紅茶 (made with black tea from Uruma, Okinawa). It was so ono! The prices are not too bad here, considering it is all homemade. I took my gelato towards the seaside area and relaxed before continuing on my journey. It was a great place to stop and take a break.

I don’t have a picture of the outside, but it is in among some other shops in a big building clearly labeled, with plenty of parking. I am pretty sure everything is in English there as this area is usually popular with tourists. 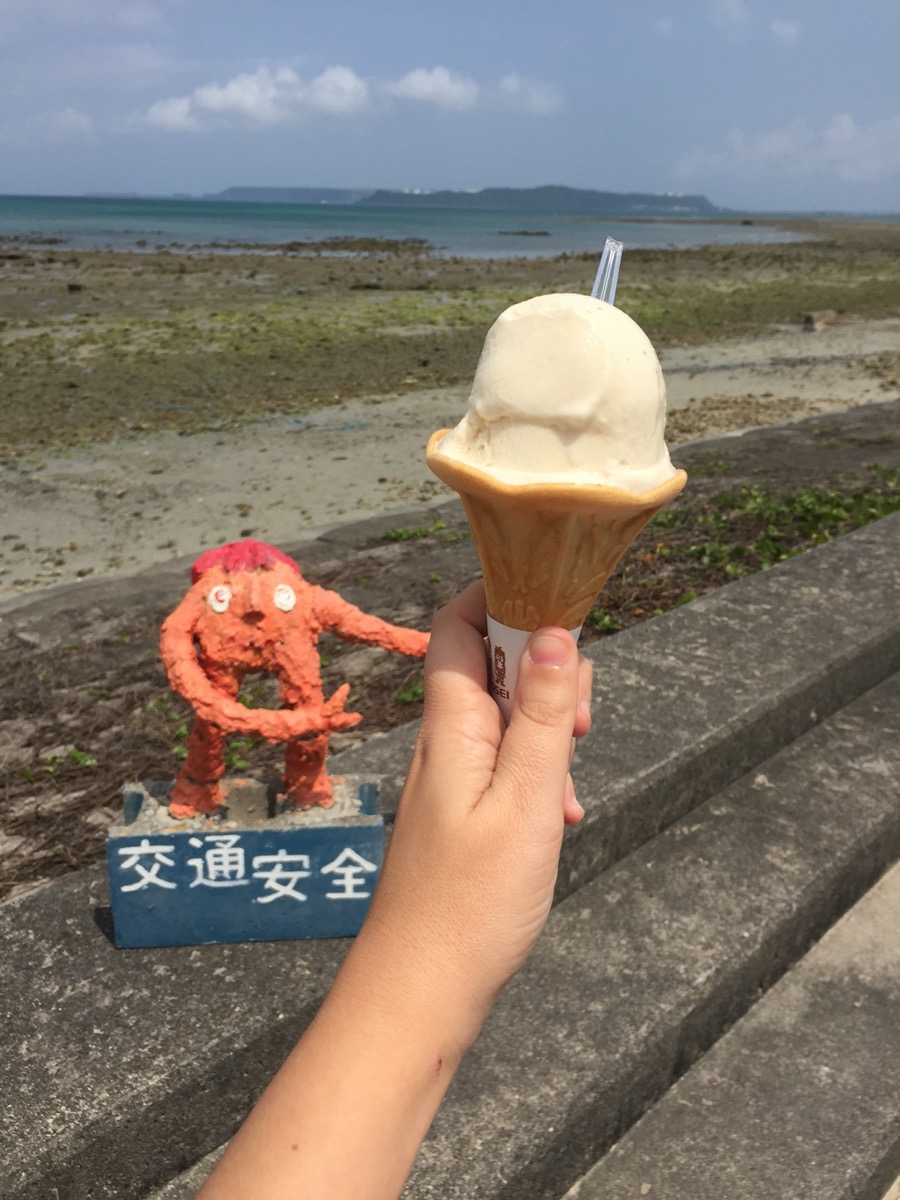 Continuation from part 1 and part 2 of Matsuyama trip.

At the end of the first day, we were lucky enough that there was a Lantern and danjiri (shrine/temple cart) festival scheduled during our visit, held in the park at the foot of the castle. So of course, we go to check out these interesting mainland matsuri called 大神輿総練 Oomikoshisouneri!

I have way too many photos to post, but it was certainly a lively and exciting matsuri. First we ate some matsuri food and drank some beer, then watched the taiko performances.

They lit the lanterns (by hand, all candles!) that adorned the danjiri. Next they started with the all-female mikoshi, parading through the crowds. Then the enormous mikoshi/danjiri rolled out with enthusiatic men on each corner whistling, waving towels, and shouting, while several men were carrying the cart and occasionally lifting it high into the air. Once they had their turn, the smaller danjiri got to go all at once– the field was filled with carts jostling about, drumming, chanting, whistling…! It was a site to see, a great way to end the evening.

To view all of the images, here is an album: https://imgur.com/a/03dUy

During our final full day in Matsuyama, it rained quite a bit, so there were less pictures. We still had a fairly eventful day, though.

First we explored a historic tea garden and a folkcrafts/textiles museum, both which happened to be open fairly early.

We then went to the day onsen near the hotel 伊予の湯治場 喜助の湯 (“Kisuke”), while not historical, pretty nice with lots of different types of baths. You had to purchase amenities separately which could add up if you do not bring your own.

Afterwards we headed towards the castle gardens, despite the rain. We paid the admission fee to look around the gardens, as well as the tea set. The garden does not always do tea ceremony, so we were fortunate that it was being held this time of year. We were brought out usuzumi youkan 羊羹 to eat and frothy, bright green matcha to drink.

Even though we indulged in a tea set, I was not finished yet… we ended up also walking downtown where I sought out various treats famous to this area, including ichiroku (1-6) tart and shoyu dango. Ichiroku tart is a lovely yuzu citrus castella wrapped around smooth bean paste; you can also buy chesunut and matcha flavors. I also bought Madonna dango (also Botchan themed), which has a really western dango taste: strawberry, vanilla, and cafe ole! It is really good, and I think it must be popular with women.

A gelato shop called SunnyMade also caught our eye, and well, yes… ! Of course we decided to split the “10 small scoops of your choice plate!” We were given a check sheet and decided which of the 18 available flavors to try (the 10 we chose were kabocha/pumpkin, iyokan marmalade, kinako/roasted soy bean, passionfruit, blueberry, strawberry, matcha, salt milk, pear, and another local citrus flavor). There was even a free toppings bar. It was delicious and I would recommend trying it, especially the local flavors!

We shopped for awhile under the covered arcade until dinner time. For dinner, we happened to find this “German” restaurant… well, it was German themed but not really so German at all. It was called Munchen ミュンヘン. We noticed a large number of people getting carry-out right away and wondered what it might be… turns out it was karaage, and this place is super popular spot to get karaage. We ordered some (Japanese) beer in king size mugs, karaage, German sausage plate, and fried gobou (burdock root). It was all actually really good, and not pricey at all. Overall my husband was very happy. Afterwards we crashed at the hotel with a few more beers from the conbini and watched the local news.