Jef ジェフ is a fast food “burger” joint here in Okinawa. There are only 4 locations, all towards the southern area of the island. It is… unique. Why? Well this place features goya ゴーヤー (English: bittermelon) in quite a few items: goya juice, goya rings, and goya-egg burgers. It’s kinda like a McDonalds, you know, if McDonalds served up goya; it is not exactly “fine-dining” but for cheap and fast eats, it isn’t too bad. And definitely an interesting experience when you come to Okinawa. Perhaps not the classiest of joints, but it has a very “old school” kind of feel.

It has an assortment of things like fries, regular hamburgers, fried chicken, and hot dogs as well as the iconic “goya burger”– which by the way is just egg, goya, and cheese topped with lettuce and mayo served on a hamburger bun no actual meat burger. Though you can get the goya burger with a slice of spam added. The goya rings are like onion rings, but with goya instead of onion, and for the daring they also serve fresh goya juice. For desserts they have things like zenzai, shakes, and soft serve ice cream. It is a pretty varied menu. Again, not like the most amazing experience you will ever have, but I kinda like them every now and then, and it is certainly one of the only fast-food burger places in the world where you can order a full meal of goya.

チャンプルー chanpuru means something mixed in Okinawa language. In Okinawa, there is “chanpuru culture” because there are so many different influences (American, Chinese, Japanese and traditional Ryukyu).

Chanpuru is a classic Okinawan dish that is stir-fried. There are many types of chanpuru, each featuring different foods. Typically some vegetables are stir-fried with a bit of egg, spam (or maybe pork), and tofu. Some dishes have bean sprouts, some have green onions, some have carrot or cabbage… I notice there are not a lot of “hard and fast” rules when it comes to chanpuru. The sauce is some combination to your taste, involving shoyu, dashi, cooking sake, and perhaps miso. Again, everyone obaasan has her own recipe. Otherwise, in grocery stores here in Okinawa, you can actually buy a sauce in the bottle. I was gifted some by one of my ladies. She had heard how much my husband loved goya and thoughtfully put together a Christmas gift basket of foods for us.

Goya chanpuru: probably the most “popular.” It is sort of the quintessential Okinawan dish, using the classic goya (bitter melon) as the center of the stir-fry, alongside some tofu, egg, spam and maybe some other veggies.

Fu chanpuru: fu is an interesting thing. It is usually long tubes of wheat gluten, often bits are added to miso soup here in Okinawa. It is very cheap, available in all grocery stores, and no real taste so it really soaks up whatever flavors you cook with. It has quickly become a favorite for my husband as it is fairly low in calories and takes on so much flavor of what it is cooked with. He has taken to ordering it at local shokudo where the waitress will sometimes look at him funny; I assume most large American gentlemen are not inclined to order it normally. But seriously, what starts as completely tasteless turns into a really flavorful food that soaks up a ton of sauce and seasoning. 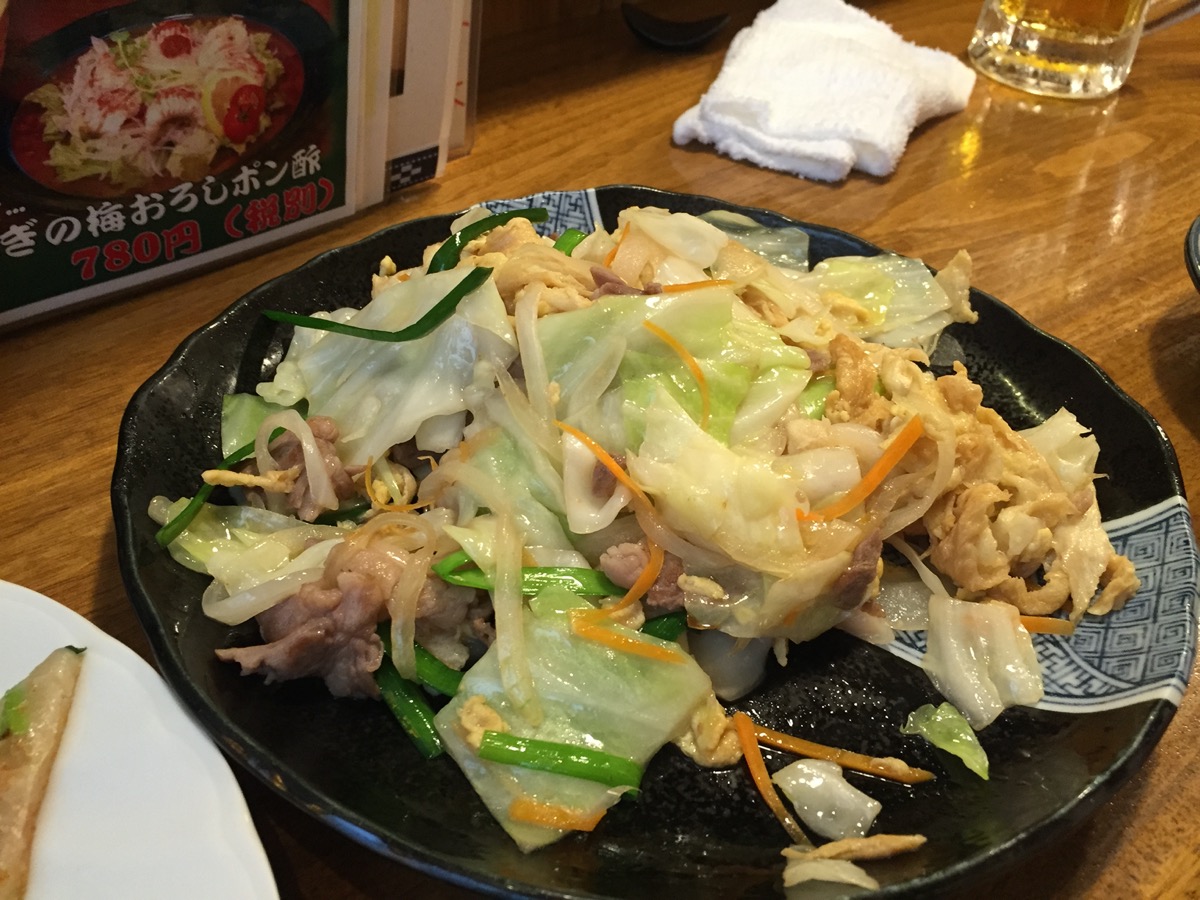 Somen chanpuru: somen そうめん are simply very thin noodles. So this is essentially noodles stir-fried with sauce and vegetables. The taste is very different than yakisoba, though, so don’t get your hopes up. It probably my least favorite of the chanpuru variations, but still, the taste is okay. They just don’t soak up the flavor like fuu does.

Tofu chanpuru: The other chanpuru only have a bit of tofu, so this version has a lot of tofu. It is probably what you would expect, large bits of tofu with some vegetables with pork or spam in sauce.

Hechima chanpuru: this one is actually pretty rare to find, but I have seen it on occasion. I mean, it is hechima (loofah in English, nabera in Okinawan) so it really is not so popular, even among Okinawans.

For those of us in Okinawa, making chanpuru could not be easier with the widespread availability of all the ingredients. There is even a chanpuru sauce sold in grocery stores (if you do not want to bother making your own). 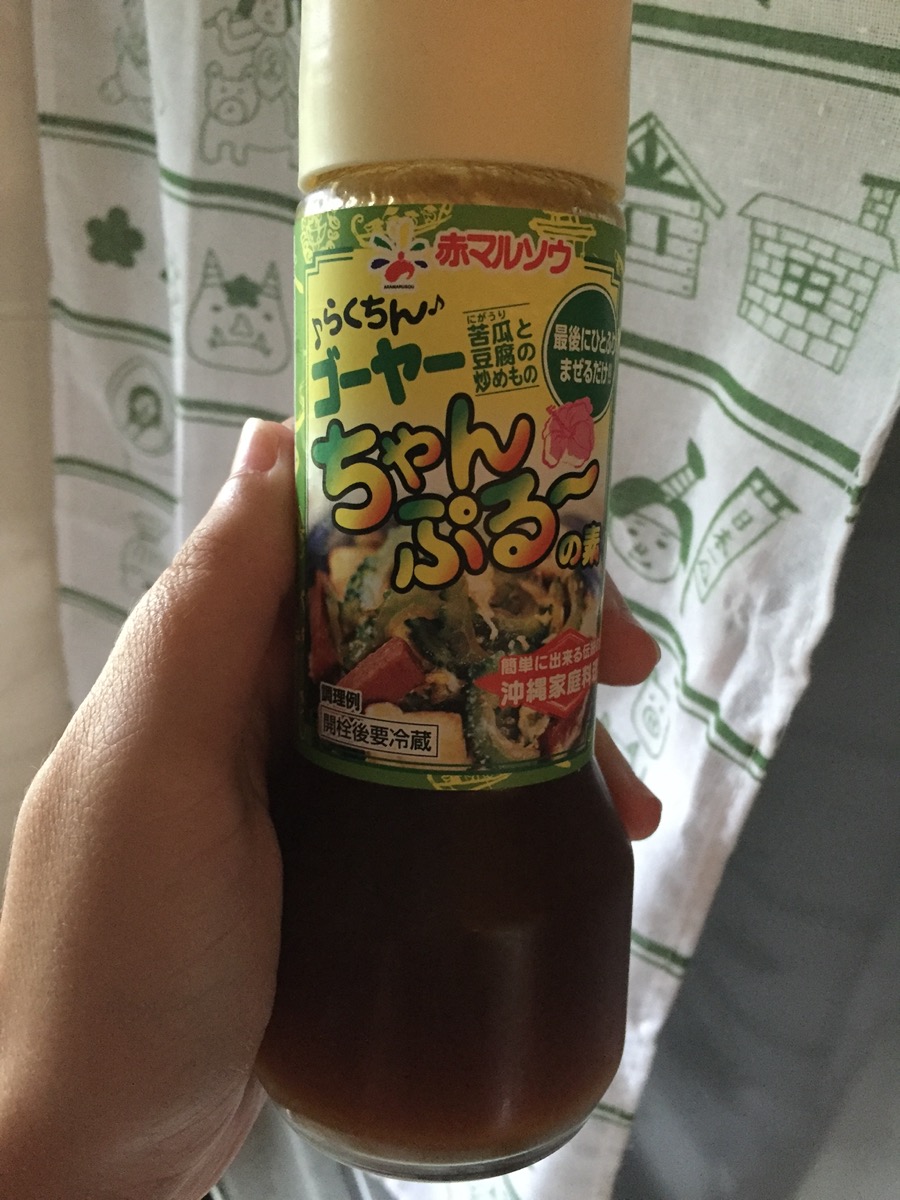 No discussion on Okinawan food is complete without the inclusion of the infamous vegetable goya ゴーヤー, a.k.a. bitter melon. This beloved vegetable is often touted as one of the reasons behind Okinawan people’s longevity. That being said, many non-Okinawans do not care for goya. Bizarrely, it is the complete opposite in my house– my husband loves it!

Goya is fairly easy to prepare and can be turned into a variety of dishes. When you get a goya, follow a few simple steps to prepare it for cooking and mitigate the bitter taste. First, cut the goya in half lengthwise, so you have 2 long strips of goya. The seeds and pith will be exposed; if any of the seeds are reddish color THAT IS OKAY, do not panic and throw it out, it is is normal. Next you will need to remove and discard the seeds and pith; my favorite way to do this is actually with a grapefruit spoon because it has those nice little scraping edges. Once the middle is cleaned, sprinkle the INSIDE (not outside) of the goya with salt and let it sit for awhile (maybe 15 minutes, half hour). Rinse and it is ready to use.

There are many ways to use it, although probably #1 in Okinawa is in a dish called goya chanpuru ゴーヤーチャンプルー. Chanpuru just means a stir-fry type dish (you will see many types of chanpuru listed on the menus in Okinawa shokudo). Goya chanpuru is typically a combination of egg, goya, tofu, bean sprouts, spam, and chanpuru sauce. You can make your own chanpuru sauce or buy it from the grocery.

You can also make goya pickles, goya tenpura, or even just grill the goya. My husband loves to just grill goya in the summertime, as a side to hotdogs or hamburgers. He just takes a half goya (cleaned) and marinates in some oil, balsamic vinegar, garlic, salt and pepper, then grills until tender.

**I have updated the page with some goya recipes.

Goya pickles can be seen at the bottom of this picture; pickles are a must for izakaya food.

Additionally, Okinawa’s home-grown fast food joint Jef is home of goya burgers, rings, and juice. If you are touristing around Okinawa, you may want to check them out! 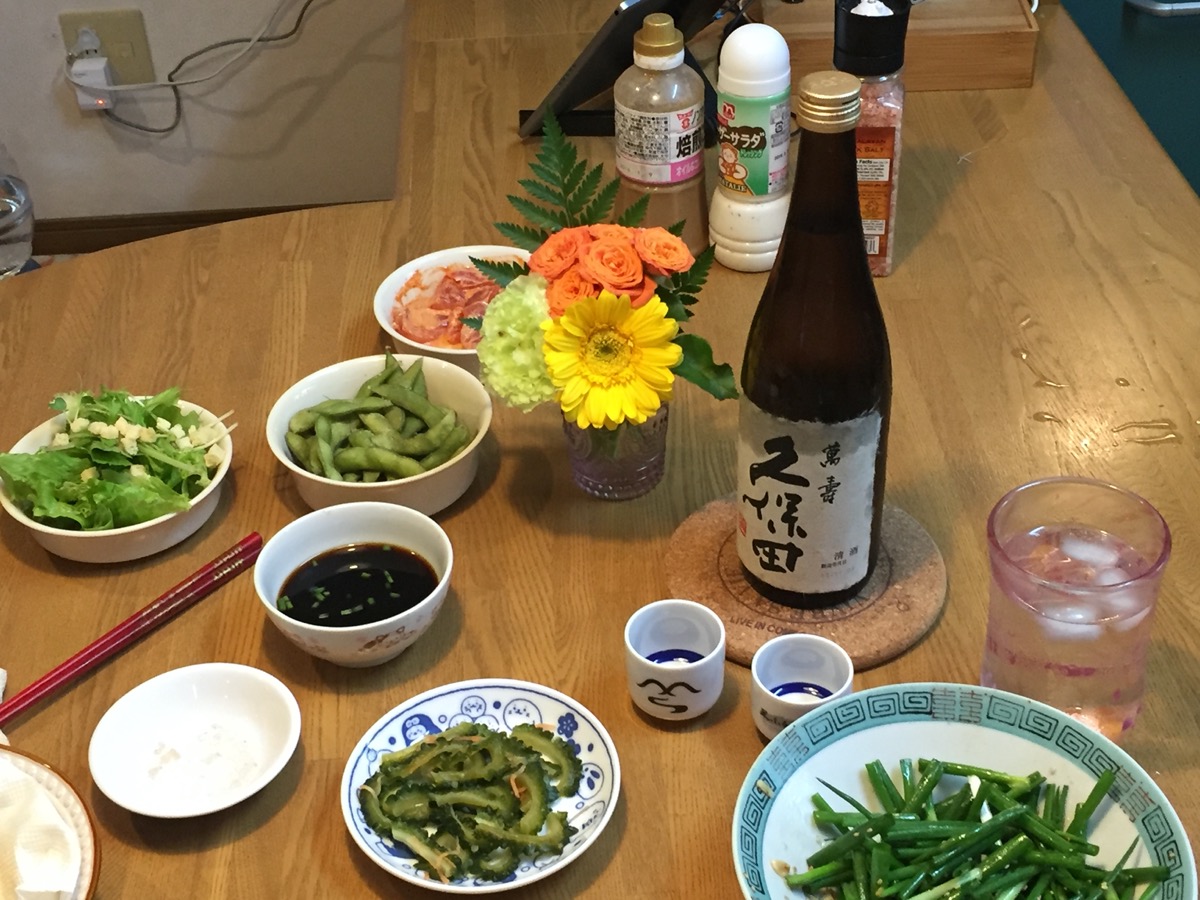