I have posted many times on sweets found in Okinawa and Japan, but this is an interesting little paper I picked up at the COOP grocery store (the one with the apple logo, not the JA’s ACoop) that described a few of the most popular and easy to make at home. I will try to adjust these recipes with more “accurate” measurements and add some personal pictures, since knowing the “right proportion of water and mochi flour to make mochi cake” is not necessarily well-known to most English speakers, as well as the fact that most people do not have easy access to the pre-mixed ingredients you can buy in local grocery stores. 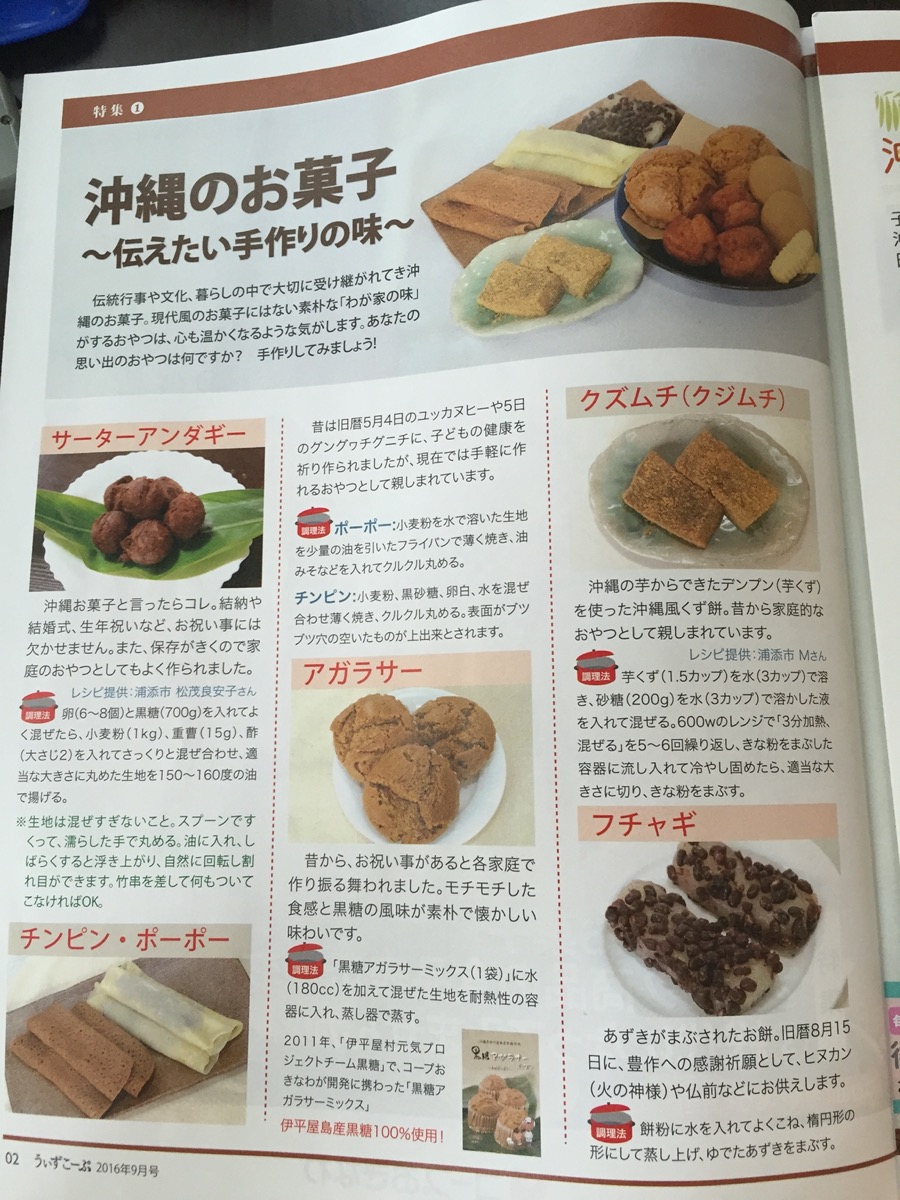 First up, we have sata andagi サーターアンダギー. These are like fried donuts. Sata andagi were used for celebrations like weddings and babies being born.

Next up is chinpin チンピン and popo ポーポー. These are very similar; they are fried crepe-like pancakes using flour and eggs, rolled up. These were traditionally made on the 5th month 4th day of the lunar year, a day known as yukkanuhi ユッカヌヒー (to pray for good luck in fishing and maritime activities, a celebration day with traditional haarii boat races), and the 5th day, known as gungwachigunichi グングヮチグニチ (this day is known as Boy’s Day, or Children’s Day, in the Japanese calendar). On Henza-jima, popo is also traditional on the 3rd day of the 3rd lunar month.

Make a thin pancake with flour and water, grilled in a fry pan with a bit of oil. Add a bit of andansu (Okinawa miso) to the middle and roll up. Traditionally, the sugar would be omitted from the pancake and added to the andansu filling instead, so that the pancake would be white. Some people would even just add white sugar to the pancake batter instead of brown sugar to the pancake to keep it white. These days, as tastes have changed, I notice most people add sugar to the pancakes which tend to give them a brown appearance similar to chinpin. Also, depending on your tastes, you could use milk instead of water in the batter. One place I bought popo actually replaced the andansu completely with a brown sugar mochi instead; so, anyway to each their own.

Chinpin: mix flour, brown sugar, egg whites, and water (again, often carbonated water in hopes for more bubbles in the pancake). Make a thin pancake and grill in fry pan, you should see many small bubbly holes on the surface. Roll up and serve. No filling in this one! *Note: many people refer to chinpin as brown sugar popo 黒糖ぽーぽー, and sometimes even just popo. Technically they are different, but it seems many people do not distinguish between the two.

Also, for those of you living in Okinawa, it is quite easy to find “chinpin” mix  in the local grocery stores as well.

Agarasaa アガラサー (also romanized as “agarasa”) is a steamed sponge cake, similar to castella. This was also made for special occasions. It has a mochi-mochi texture (chewy) and is very enjoyable. Many grocery stores will sell the mix for this, so all you need to do is add water and using a steamer basket, add batter into small aluminum tins and steam over high for ~10 minutes. (I will post a “from scratch” recipe later). Traditionally it is made with brown sugar, though you will see other “flavors,” and it would probably be steamed in sannin サンニン/月桃 (shell ginger leaves). Most people at home do not bother with the sannin leaves these days, and likely most grocery stores selling these prepackaged do not either.

Kuzu muchi クズムチ, also called kuji muchi クジムチ, is a type of mochi made with a sweet potato starch (imokuzu):

Mix imokuzu with 3 cups of water, and dissolve sugar in remaining 3 cups of water; mix together. Heat mixture for 3 minutes on 600 watts in microwave range and remix, 5-6 times. Pour into containers, sprinkle with kinako and let chill until gelled/solidified (it won’t get firm per se, but should hold together).

Last is fuchagi フチャギ, which I wrote about in another post. The recipe is very simple, mix 1 1/4 cups of water and 300 g of mochiko (mochi flour), form into rectangular shapes, steam for 15 minutes, and cover immediately with softened/boiled azuki beans.

Interested in more Okinawa sweets? Check out these posts on sweets that are special to Okinawa: