Another “Path of History?!” Yes, another historical path from the Ryukyuan era, this time located in Kunigami 国頭 district (northern part of the main island). It is part of the original National road that used to connect Shuri-jo to the northern part of the island, built sometime around the fifteenth century.

To walk this path, a good starting point is the Onna Village Museum, since there is decent parking. There is a map post here that shows the route. You notice there is some path and sites further up at Nakadomari 仲泊 milestone, but we skipped that portion for today and only went from just before the “You are here” (by the Nakadomari ruins) to #6 Yamada stone bridge. We will save the rest of the hike for another day: 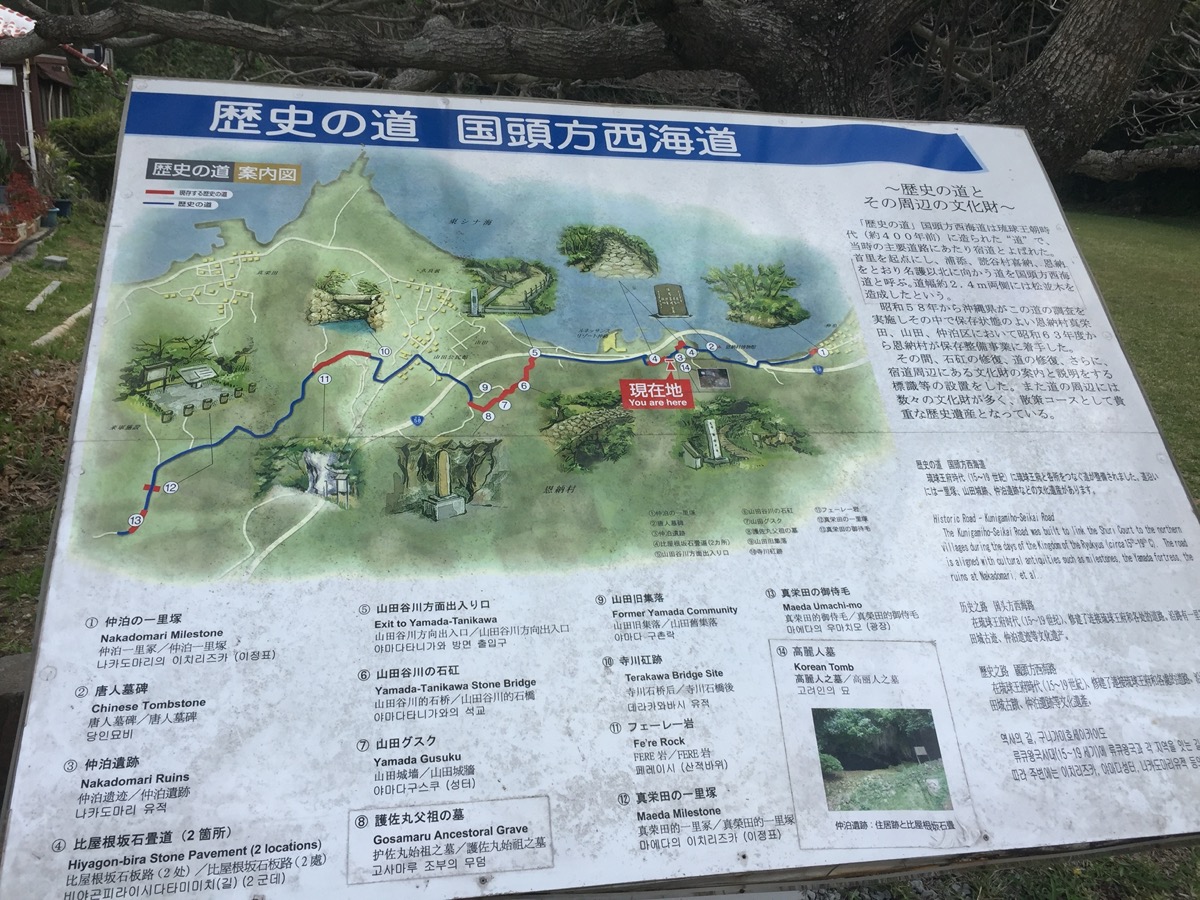 As you start walking from the Onna museum, there is an interesting restaurant called 田芋 Taimo (or Taamu/Taanmu in Okinawan). There is a Spiderman statue out front, but it just serves local Okinawan food.

First, you will come to the stone path: 比屋根坂の石畳道  Hiyagon-bira ishidatami michi (“bira” means “slope”, “ishidatami michi” is “stone path”). It is a steep climb up, but you will be rewarded with some views. Next you descend and pop out by Rt. 6.

Now you walk along Rt. 6 for a bit (with all that traffic) until just past the Renaissance Resort where the stone path picks back up again. It will be obvious and there will be signs, so don’t try to turn down any unmarked paths.

From here, you will head (mostly upwards again!) to 山田谷川の石矼 Yamada Yaagaa Ishibashi (ishibashi is “stone bridge”) made from Ryukyu limestone; the bridge was restored some years ago. *Note 谷川 in Okinawan is pronounced “yaagaa” instead of “sakugawa” or “tanigawa,” and unfortunately the “official” map posted has this incorrect after re-checking with some reliable sources regarding this Ryukyuan path and historical properties, as well as the signs actually at the bridge! Anyway, this bridge is an example of Ryukyuan engineering. There was a small stream and plenty of foliage (so you know, bug spray!). At this point we turned around before it got dark out since this was an early evening walk.

addresses for path we walked:

Yamada Yaagaa stone bridge (from my understanding you cannot access this from the road it claims you can on google, so be careful, this is only for walking purposes): https://goo.gl/maps/v5SzTH6WYyn

Japanese brochure for path (I think you can pick one of these up inside the Onna Museum): http://www.onna-culture.jp/common/download/kaido-brochure.pdf

The previous post described the first half of my walk today through Shuri’s Hijigaabira. This next part will focus on the second half where I took the Kinjo-cho ishidatami michi, the more famous of the Shuri stone paths which miraculously survived the Battle of Okinawa. It is quite scenic and reminiscent of the Ryukuan era, with many traditional Okinawan features.

Along the descent, there are some pricey cafe spots in addition to the historical sites. They offer fantastic views should you choose to grab a snack or drink there, though I have never tried any of the food or drinks… I usually just get a vending machine drink from the top of the path before entering.

There are several signs for botanicals, some very large old akagi (acacia) trees estimated to be more than 200 years old, utaki (places of worship), and gaa (water springs/wells). Partway down there will also be a rest house; if you remove your shoes you can enter and sit for awhile. The whole path has preserved characteristics of traditional Ryukuan architecture.

After exiting the stone path, it was time to head back, however we continued to pass some more historic sites along the way. First is the 金城橋 Kanagusuku-bashi (bridge). There are also some shokudo restaurants around this area where you can try local Okinawan food.

Further along we passed 前道(メーミチ) Mehmichi where many gaa (water springs) were abundant in the Ryukyuan era. Apparently there used to be (and still are a few now) tofu shops along here, which made use of the high quality spring water.

I did not pass it on this trip, however there is also a shrine near Shikinaen gardens, called Shikinagu 識名宮: https://goo.gl/maps/YXRRaETMz1Q2

ヒジガービラまーい (ヒジ川ビラ) Hijigaabira maai: this comes from the name of the spring water well on the west side of the cobblestone road; it looks like a beard 髭 (hige in Japanese, hiji ヒジ in Okinawa language). A “gaa” is a river 川 (gaa ガー in Okinawan, kawa in Japanese). “Hira” (turns to a “b” sound, bira, when combined) means slope, and maai is meaning a loop road.

金城町石畳道 Kinjo-cho ishidatami michi: Kinjo-cho is the name of the town; “ishi” means rock in Japanese, the path is cobbled so it somewhat resembles Japanese tatami. “Michi” means road in Japanese. This path is quite famous, and survived the Battle of Okinawa quite intact.

We parked at Shikinaen (gardens) 識名園, in the large public parking lot in the area where these routes begin. From the park, there were several signs pointing the way. You do pass through a large graveyard, but not to worry, this is an actual road. There is also an awesome bakery Imai Pain いまいパン along the road; it has many delicious goodies (yes, they spell it pain, as in the French word for bread, instead of “pan” like in romaji).

The lesser known historical stone path, Hijigaa bira maai, has several points of interest with plaque markers, some of them with a bit of English. It is steep in portions, and since there are some sections stone path it is best to wear shoes with a decent grip. Pictured below is a “map” of the route on one of the stone plaques. 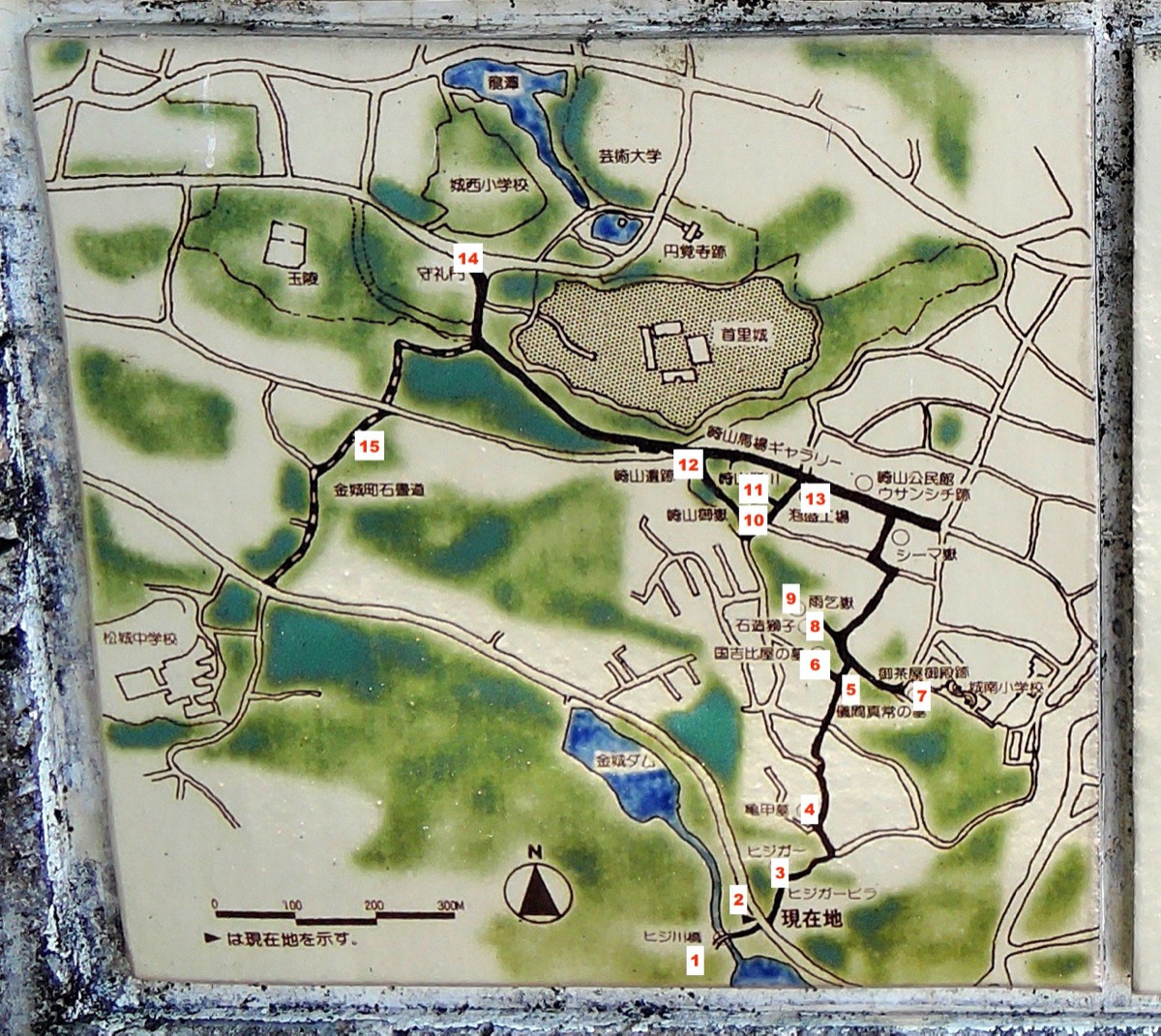 The actual path starts at the Hijigaa (1) bridge adjacent to Kinjo dam. The bridge itself does not seem so interesting as a whole, but a good amount of craftmanship went into constructing this type of bridge.

From here, we crossed the street to the entrance of the Hijigaa stone slope (2); down the street before entering the stone path, there is yet another nice little desserts shop Dessert Labo Chocolat in case you need some extra energy before starting.

The stones making up the path are preserved history, of a long ago Ryukyu kingdom. Along here you can find the Hijigaa (3), though it is fairly covered with overgrowth. Continuing along, the original stone pavement itself will end, however you will continue to see signs for the path as well as stone tiles set into the regular road making it quite easy to follow. There are some turtleback tombs 亀甲墓 kamekoubaka (4), and then a large tomb area for Gima Shinjo (5), a guy who helped spread sweet potatoes in Okinawa as well as some other contributions.

There are 2 more grave sites for Tasato Chochoku and Kuniyoshi no Hiya (6), off a small pathway. Tasato helped to develop Kumiodori during the 18th century. Kuniyoshi no Hiya was a lord who lived in the 15th Century, and appears in one of Tasato’s plays.

Next will be the ruins site of the Uchaya-udun (7), a Ryukyu tea house where royalty entertained Chinese envoys; not much to see here as it was destroyed in the Battle of Okinawa, and right now it is located within the premises of the Shuri Catholic Church. Continuing back to the path leads to a small park starting with the Uchaya-udun stone lion (shisa) 御茶屋御殿石獅子 (8). It was also destroyed in the Battle of Okinawa, but has been restored.

Next you come to 雨乞御嶽 Amagoi utaki (9): place of worship for rain. Around here you will notice spectacular views; there is an observation deck area and on a clear day (like today) you can see the Keramas. Now you have made it to the Sakiyama Park (10, 11, 12); there is another hijagaa and a few more utaki (places of worship). Today we were fortunate to see the first blooms of sakura in the park. From here it ends at a marked entrance spot near the Awamori distillery Zuisen 瑞泉 (13), the same street where the sagaribana bloom in summer. A short while later you come upon Shureimon守礼門 (14) located at Shuri-jo 首里城.

The second part of our walk was through Shuri-jo and then back down towards Shikinaen via Kinjo-cho ishidatami michi (15); continued here in Part 2.

For some pictures along the route, check out the imgur album; although I didn’t think to get pictures of every stop on the way, I think I got most of them.

Some addresses to help with mapping: