そうめん (素麺) somen: a type of noodles made of wheat flour so they are white and very thin. It is a very popular dish during summer.

I wrote previously about Tanabata and how it is not really celebrated the same in Okinawa. But with ever-changing populations, you see a little more each year.

A traditional food for Tanabata is… somen! Not only is it perfect as a summer dish, but the noodles represent the Milky way and Orihime’s threads (she was a weaver).

This type of somen dish is served chilled with a a tsuyu つゆ dipping sauce (mix of shoyu and dashi). If you want to be fancy, you can slice up okra and serve on top (they look like cute little stars). Or you could cut other veggies into star shapes, but that sounds like too much work for me, although there are many Japanese kitchen gadgets used for bento to aid with this. Perhaps you could even find those cucumbers grown into star shapes here in Japan.

Some places in Okinawa will have a nagashi-somen 流しそうめん event (translation: flowing noodles) around this time of year. A bamboo “slide” is set up and you grab them as they go buy with your hashi 箸 (chopsticks). It’s a lot of fun, so I recommend trying it.

七夕 Tanabata is known as the “star festival” in Japan.

In Okinawa, it is observed during the lunar calendar (like many other holidays…) instead of the solar calendar (more typical in mainland Japan). It occurs on July 7th in many parts of mainland Japan, and the 7th day of the 7th lunar month in Okinawa, usually around August, just before Obon begins. It is the precursor to Obon; mostly it is the day to clean the ancestors’ grave, put flowers, beverages and incense in front of the grave to guide the ancestors’ spirits to come to one’s house. It is a time to ask ancestors to come visit during Obon season; it is believed that the ancestors protect their descendants in the real world, so it is important to take of them in their afterlife. 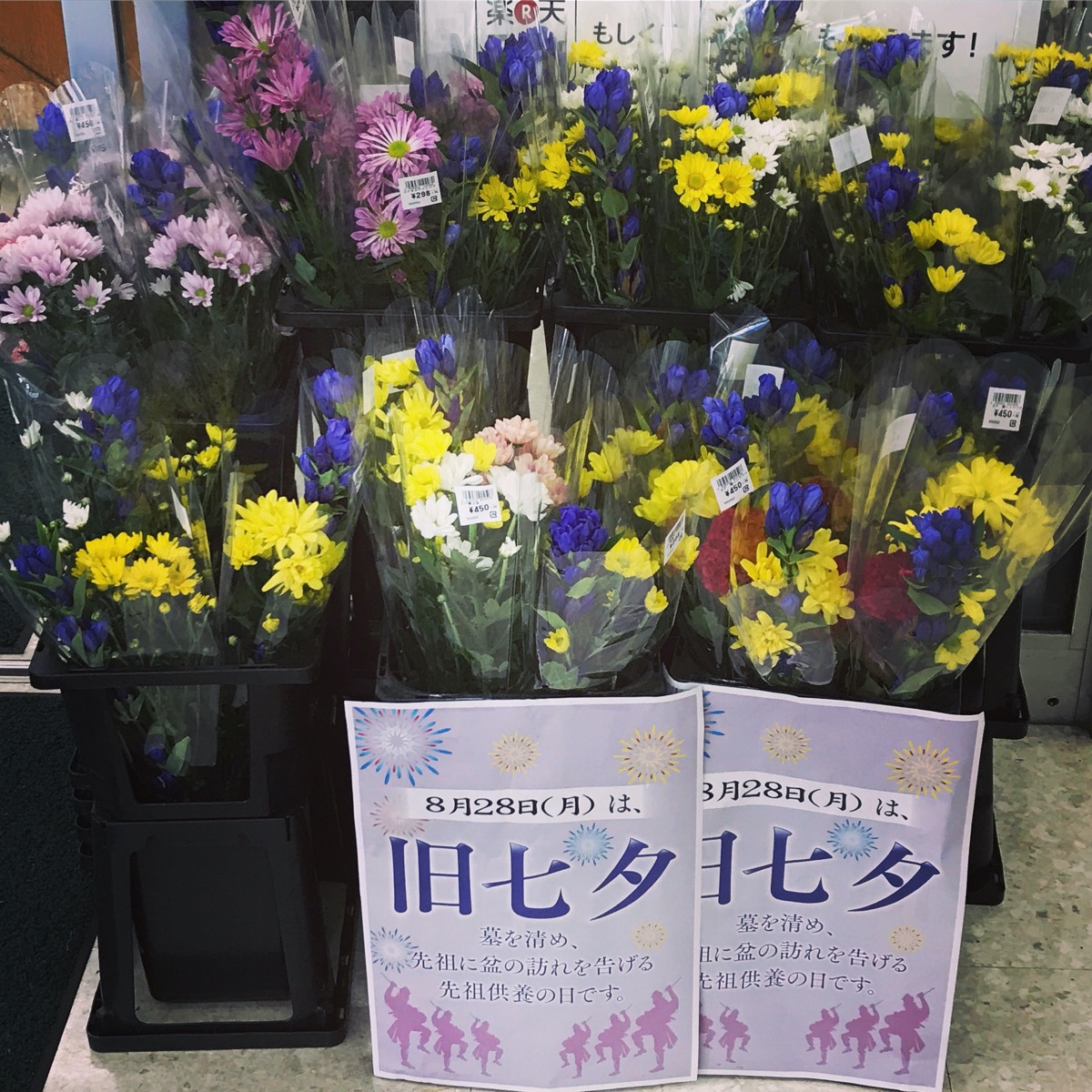 In present day, Tanabata in Japan is typically celebrated as a school event; students decorate bamboo branches with ornaments and hang strips of colorful paper with their wishes written on them, called tanzaku 短冊. Ornaments made of origami paper are made into shapes such as windsock, stars, lanterns and nets. They all have a meaning; for instance, the net-shaped paper represents a river. Several retail stores and community centers will put up Tanabata trees with decorations, and leave blank slips of paper for you to write your wishes on to hang on the tree.

The story of Tanabata, based on a Chinese legend of the “weaver star” (known as Vega in English) and the “cowherd star” (Altair): There once was a young woman named Orihime (Vega), who was good at weaving cloth and worked very hard to the please her father. But, as she worked very hard she became afraid that she would never fall in love and marry. Her father, Tentei (Sky King), who was a god, arranged for her to meet a hard working cattleman Hikoboshi (Altair) who lived across Amanogawa River 天の川 (literally, heavenly river, the Milky way) on the eastern side, while Orihime and her father lived on the western side.
The two fell instantly in love and married, but subsequently she forgot about weaving and he let his cattle wander all over on both sides; this made Tentei angry. He ordered the two to separate and each to live on a separate side of the river. His daughter wept and pleaded, however, so Tentei relented a little, and allowed the two to meet once a year, on the night of the seventh day of the seventh month.

So, if you look up into the evening sky on July 7 and it is clear, you can see the two stars reunited. But if it is rainy or cloudy, know that they will try to meet again next year. Some children will even make teru teru bozu てるてる坊主 to wish for good weather such that the lovers will meet again!

In Okinawa, the Tanabata story is usually a little different, and actually refers to the Celestial Maiden Legend (Hagoromo), which is believed to have occurred at Mori-no-kawa in Ginowan. The Ginowan summer matsuri is themed around the celestial maiden legend; even the city mascot is the celestial maiden! So, to conclude, Japanese tanabata is celebrated quite differently from Okinawa tanabata. While you may see a few wishing trees up at department stores or community centers and cute tanabata-themed packaged snacks, there really is not much public tanabata celebration in Okinawa like there is in mainland Japan. One day I hope to make the Sendai Tanabata festival held August 6-8 (not quite using the lunar calendar, but close…).

Typically in Okinawa, the only 2 places with “events” around July 7th Tanabata are Okinawa city 1st street shopping arcade in Koza, and the Itoman Peace Memorial Park.