I decided I would post some of my favorite fruit and vegetable markets here in Okinawa. Most of these are near to RyuDai (University of the Ryukyus), not necessarily the American bases. I prefer the markets with less foreigners (since most of the ones that cater to Americans import a lot of their produce to satisfy demand) and more domestic/local produce, rather than imported goods. It is always import to check/read the labels to see where your produce comes from– just because it is sold locally does not mean it is grown locally. That being said, some products simply are either not grown locally, or very expensive compared to imported versions, so sometimes you have to pick your battles.

A good example of this is garlic: Chinese garlic is incredibly cheap, and a lot of the garlic sold in Okinawa comes from China. Garlic from Aomori prefecture is pretty expensive, and while it may be higher quality and tastier, it can be hard to justify the price especially when you are on a budget. Locally grown Okinawan garlic is seasonal, so it is important to buy it while it is cheap during Spring time! Of course, it only lasts so long.

Anyway, first check out the key terms for locating a farmers market in GoogleMaps, then I list some of my favorites. If you are in Okinawa looking for fresh local fruit and vegetables, these are some of the best places to look in the South-Central area of the island. Perhaps later I will add some of the Northern area markets in… (like Onna-no-eki, a great place to check out if you go up there!). There are also plenty of supermarkets around, but often times you will find better deals at the farm markets, so it is worth checking them out.

List of recommended markets (I will update with some more as I have time):

Nakagusuku Farm Minami 中城ファーム南 (Nakagusuku): This place usually has a lot of stuff cheap. It is my “go to market” whenever I need something.  https://goo.gl/maps/AQjmqmgEXDD2

HappyMore ハッピーモア市場 (Ginowan): Sometimes cheap, sometimes not so cheap, it depends on the item… but it has a lot of chemical/pesticide-free and “organic” items, as well as a curry cafe with smoothies. It is a really nice market overall. Sometimes I can find interesting things.  https://goo.gl/maps/Z8kbW8tFeho

Kariyushi 軽便駅 かりゆし市 (Nanjo): Tons of locally-grown stuff, and usually the cheapest prices around. It is a bit further from me, so I don’t go there as much as I would like. I only ever see locals in here, never foreigners. Also this place has a lot of fresh cut flowers for cheap, as well as potted plants. https://goo.gl/maps/djLtDsgPBs42

JA Agarihama あがりはま市場 (Yonabaru): One of the Japan Ag (JA) stores. Usually not too crowded (unlike the JA stores near the bases). Sometimes a bit more expensive than the other farmers markets, but cheaper than produce at the supermarkets/grocery stores.  https://goo.gl/maps/cqA1wfFXvJo

JA Kugani くがに市場 (Haebaru): Also one of the JA stores, this one is brand new. It has a lot of variety and things I have not seen in the other JA markets. There is also a gelato stand outside here… dangerous! https://goo.gl/maps/BhYwQHaWB8K2

Agri-house Kochinda アグリハウスこちんだ (Yaese): Lots of cheap, local produce, as well as eggs (there is an egg farm next door). You can buy eggs in bulk here.  https://goo.gl/maps/RU5kid6kcjH2

Or here for some Food Vocabulary.

And here for Japanese Phrases for Food Shopping

軽便駅かりゆし市 “Keibin-eki Kariyushi-ichi” is the name of a fantastic local market in Nanjo, the southern part of Okinawa. Every time I go, it is locals only. Maybe 外人 do not really know of this place. It seems to be a bit further from the American bases. But this place almost always seems has some the cheapest, freshest local produce with a lot of variety. There is even a huge selection of fresh cut flowers, as well as plants. There are breads from local bakeries, local eggs, EM products, and other local products. The place is quite large and has lots of parking.

This market is one of my favorites and I never walk away disappointed. They are open every day from 8am- 7pm.

In my village, on the 4th Sunday of the month there is a small community farmer and fish market. This mostly consists of the older folks with small farms or ones who like to make prepared foods. Sometimes there are special events (like free mozuku or free fish soup). I really like attending this and being able to support my neighbors. The first few times, we were often stared at, but now I think most of them expect to see the foreigner couple show up now.

Everything is really cheap, so we always go and buy some produce. It is an easy bike ride away, so we get our exercise at the same time.

Mozuku is a type of Okinawan seaweed. It is kinda slimy, but the taste is mostly salty and not too ocean-y.

Recently, the once-a-month farmer’s market in my village had free mozuku, as much as you could stuff into a plastic bag. At first, we felt a bit timid… neither my husband nor I have actually prepared mozuku ourselves.  We have eaten it several times as part of a teishoku (set meal) in Okinawan restaurants, but it is not something that I really go out and buy. But who can turn down free? So my husband got a baggie and got in with the ojiisans and children to fill up.

I think the best way to prepare mozuku is to fry it in tempura or add it to okonomiyaki (the Okinawan version is hirayachi: ヒラヤーチー). It is also possible to prepare it as mozuku-su, which is just prepared with vinegar.

Mozuku-no-hi もずくの日 (mozuku day) is the 3rd Sunday in April. 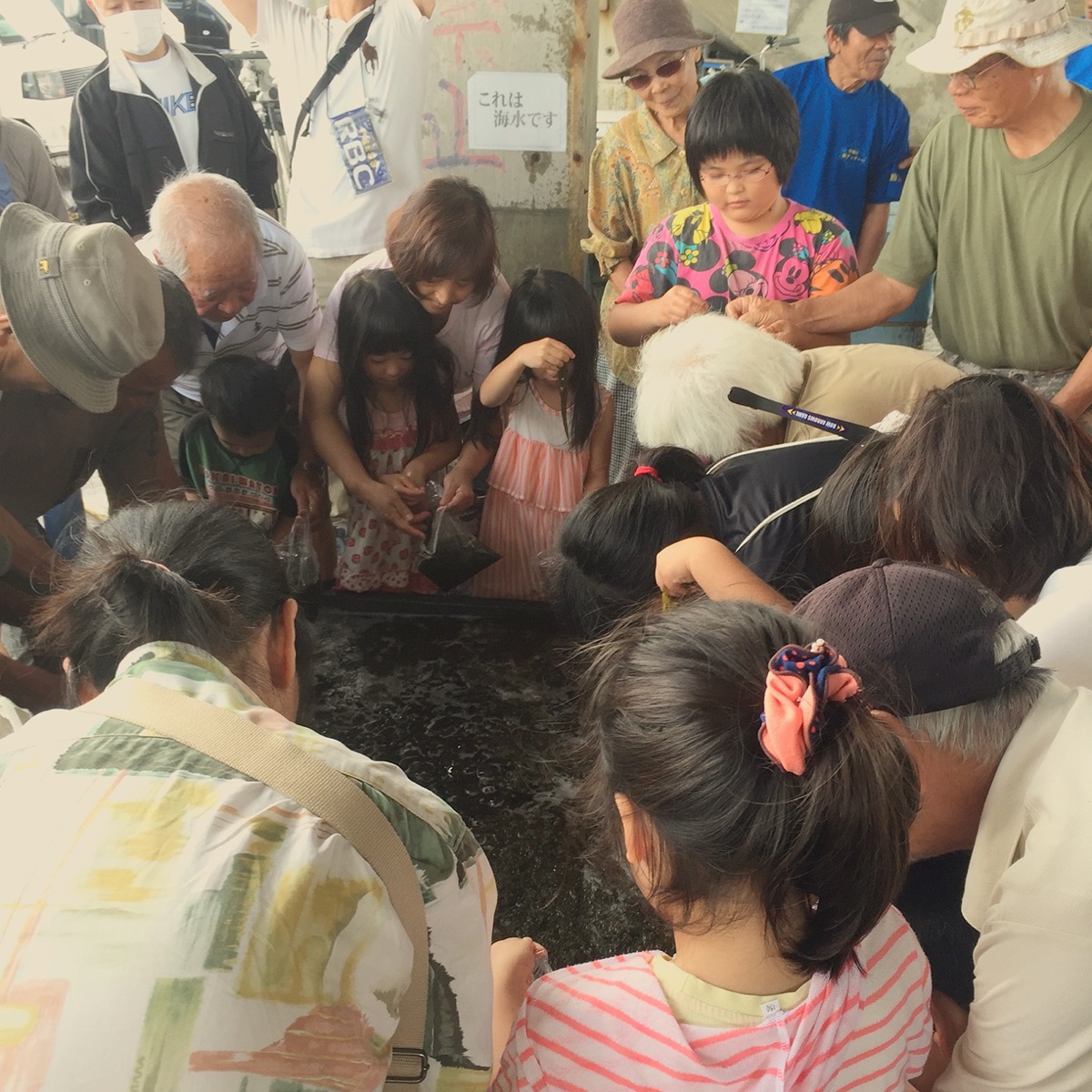